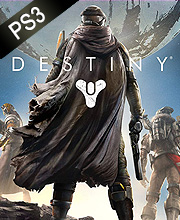 It's a digital key that allows you to download Destiny directly to Playstation 3 from PSN (PlayStation Network).

How can I find the best prices for Destiny on Playstation 3 ?

Destiny could have been something really great, but instead of living up to any of its potential, it comes off as a mediocre first-person shooter with little imagination. It feels like the entire game is a placeholder for what could eventually be a better product. But if this is the bare skeleton at the core of all that is to come, with its barely-different classes and repetitive missions, is it really even worth holding out hope for the game’s future?

Destiny has a lot going for it. It has a solid gameplay foundation and a good framework for future updates. The presentation is nothing to sneeze at either. It’s certainly a lot of fun to play. The downside is that the game does nothing to create an interesting universe for you to explore. It become a mindless grind.