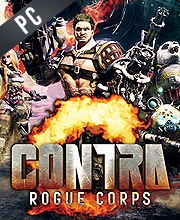 It's a digital key that allows you to download Contra Rogue Corps directly to PC from the official Platforms.

How can I find the best prices for Contra Rogue Corps CD keys?

Allkeyshop.com compares the cheapest prices of Contra Rogue Corps on the digital downloads market to find the best sales and discount codes on trusted stores.

Contra: Rogue Corps is an action video game that is published and developed by Konami Digital Entertainment.

We are graced by yet again another Contra game which is set two years after the alien wars. The Damned City is left with almost nothing because of all the chaos.

Among all the craziness that is happening emerges some unlikely heroes who are determined to save the world.

The game offers both local and online co-op that is available for up to 4 players. Each of the four characters that you could choose from has their own weird and wild style and attitude. There are over 100 different weapons for you to build. Also, get to upgrade your character with the many body parts that you get to earn in missions. Extended replayability is to be expected especially with the game’s progression, weapon development, and customization. There will also be new heroes that are crazy as well as new bosses that will be challenging to defeat.

EU STEAM CD KEY: Requires an EUROPEAN IP address or you must activate it with a VPN (Virtual Private Network) in order to play Contra Rogue Corps. Might have languages restrictions or language packs. Read the description on the store game page to know if the EU IP is only needed for activation or for playing also (maybe on EU Servers). Most of the stores offer you their help, or show you how to do this with a tutorial to follow.
STEAM CD KEY : Use the Steam Key Code on Steam Platform to download and play Contra Rogue Corps. You must login to your Steam Account or create one for free. Download the (Steam Client HERE). Then once you login, click Add a Game (located in the bottom Left corner) -> Activate a Product on Steam. There type in your CD Key and the game will be activated and added to your Steam account game library.
STEAM KEY ROW : It means for Rest Of the World countries which are not concerned by the region restrictions. This product can't be purchased and activated in Several countries. Please read the store description to know the full list of countries which are concerned. Use the key to Download and play Contra Rogue Corps on Steam.
Bonus Edition
Preorder bonus
Standard Edition

Eh, don’t really like the design/graphics nor the choice of 3rd person 3D view – it should have sticked to being a 2D sidescrolling shooter…

This game looks very entertaining and very satisfying, i will look at him.

This Contra and that old Contra does not have much in common. This one still looks pretty good and fun. A bit pricey though.

This game is looking as very iteresting, i need look more about this game and i think allkeyshop will bring us best price.

This game got some great deals on allkeyshop! Maybe buy it now?