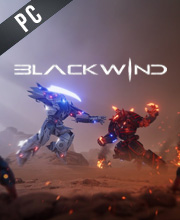 What is Blackwind CD key?

It's a digital key that allows you to download Blackwind directly to PC from the official Platforms.

How can I find the best prices for Blackwind CD keys?

Ultimately, Blackwind is very much a budget experience. If you go in knowing what to expect however, there’s a lot of fun to be had here. Its combat is competent and engaging, there’s a solid upgrade tree to work your way through, and solving puzzles to explore its environments adds a little more variety to the mix. Its environments lack any real excitement, however, and it’s missing a spark of innovation. But that doesn’t mean it doesn’t provide enough entertainment for those looking for some basic action.

Zoom 1m 3m 1y All
Track product
GOG.COM CD KEY : You need to register on Gog.com, then use the GOG Key to download and activate your game to play Blackwind.
STEAM CD KEY : Use the Steam Key Code on Steam Platform to download and play Blackwind. You must login to your Steam Account or create one for free. Download the (Steam Client HERE). Then once you login, click Add a Game (located in the bottom Left corner) -> Activate a Product on Steam. There type in your CD Key and the game will be activated and added to your Steam account game library.
Standard Edition
Compare Choose & Buy Download (791)