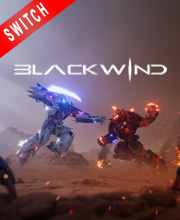 It's a digital key that allows you to download Blackwind directly to Nintendo Switch directly from Nintendo eShop.

How can I find the best prices for Blackwind on Nintendo Switch ?

Overall, Blackwind is a regrettably forgettable game. Unable to decide if it’s a twin-stick shooter or a hack-and-slash, with repetitive (and sometimes downright boring) level design, and cringe-inducing voice-acting, there’s little to recommend here. Honestly, the best way I can describe this game is in terms of food: Blackwind would be unflavored, plain oatmeal. Sure, it’s edible, but do you really want to eat it?

Zoom 1m 3m 1y All
Track product
NINTENDO CODE : This is a digital code for Blackwind. Use the download code on the Nintendo eShop of your Console. Once connected to the Nintendo eShop, you can enter and redeem the Download Code. Read carefully the store description about any language and region restrictions.
Standard Edition
Compare Choose & Buy Download (791)