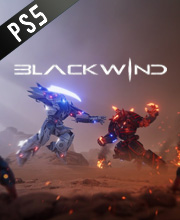 It's a digital key that allows you to download Blackwind directly to Playstation 5 from PSN (PlayStation Network).

How can I find the best prices for Blackwind on Playstation 5 ?

Blackwind is an enjoyable twin-stick shooter that features intuitive gameplay and a wealth of satisfying moves. That being said, if its campaign was structured in a more comprehensible manner then it would be a much more fulfilling adventure.