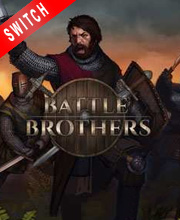 What is Battle Brothers CD key?

It's a digital key that allows you to download Battle Brothers directly to PC from the official Platforms.

How can I find the best prices for Battle Brothers CD keys?

Newcomers to the franchise will find Battle Brothers very hard to pick up, especially due to the lack of a proper tutorial. I do love those games that don’t hold your hand, but I think Battle Brothers is in a league of its own and some more complex aspects should be made more clear. Although the learning curve is quite steep, once you get the hang of it, Battle Brothers is actually a very enjoyable experience. I strongly recommend those looking for a challenging turn-based RPG to give Battle Brothers a try, not just for the complexity of building the perfect company of brothers, but also for its stunning soundtrack and art style.

Zoom 1m 3m 1y All
Track product
NINTENDO CODE : This is a digital code for Battle Brothers. Use the download code on the Nintendo eShop of your Console. Once connected to the Nintendo eShop, you can enter and redeem the Download Code. Read carefully the store description about any language and region restrictions.
Standard Edition
Compare Choose & Buy Download (791)