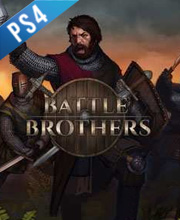 It's a digital key that allows you to download Battle Brothers directly to Playstation 4 from PSN (Playstation network).

After initially turning me away with an unhelpful tutorial and a stiff learning curve, Battle Brothers morphed into a worthwhile and gripping tactical experience, and conquering its barren, bloody landscapes stands firmly among my proudest gaming accomplishments so far.