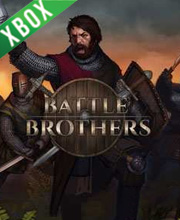 It's a digital key that allows you to download Battle Brothers directly to Xbox One from Xbox Live.

How can I find the best prices for Battle Brothers on Xbox one?

Battle Brothers is rewarding – at least if you stick at it. But making a save before every battle is very much the way to go. There’s no doubt that there’s a lot to get involved in and there’s a ton of content to enjoy, but the difficulty sits in the mix like a wasp nest at a picnic – sooner or later something is going to sting, and it won’t be pleasant when it does.