15 of the Best Shoot ’em Up Games and Compare Prices

“You want to play a Shoot ’em Up Games, but don’t know which one to choose?

Luckily Allkeyshop is here to help you with this top 15 of the best Shoot ’em Up Games!”


Nova Drift features dying stars, deadly foes, and an ever-evolving biomechanical ship. Customize and create your build, utilizing drones, shields, thrusters, and more than 200 upgrades as you shoot your way through enemies in randomly generated runs. Play through a vibrant campaign or discover rewards across challenges in a game where everything is possible.


Shoot your way through intense action in this side-scrolling shoot ‘em up. Travel through space and parallel dimensions, and lay waste to space stations and cities. Equip new items and weapons as you go and destroy everything with the power at your disposal.


Play to your music and use a song’s tune to power up your spaceship, increase your firepower, and smash your way through enemies using the beat’s power. The song will decide your unique spaceship, every song has its leaderboard, and there are daily challenges to compete in that offer exclusive ships. Put your favorite track on, challenge a friend, and use the beats to dominate the leaderboards.

Test your skills and reflexes across 18 fast-paced and insane levels in this arcade-inspired bullet-hell. Play for 100 Steam achievements, play with a friend in an original 2-player story, play to earn a place on the online leaderboards, and enter Survival Mode and stay alive as long as possible.

Set at the end of the Second World War, find out what happened at the end of the first game, and finally uncover who is hunting you down. Play as Vinnie, with enhanced movement, aiming, jumping, weapons, and abilities. Complete the epic campaign single-player or with a friend, and explore the rich environments and humor that make this game unique.

Slaughter zombies and other enemies in this rhythm-based shoot ‘em up. The game features 24 fast-paced, blood-soaked levels, multiple licensed tracks, and a community editor to upload your own songs.

9. Lovers in a Dangerous Spacetime


Explore a massive neon galaxy in 4-player co-op and work together to man turrets, shields, and thrusters as you battle across the stars. Upgrade your ship using space-gems and equip abilities to survive across the randomized levels.

Bring down NEXY at all costs and learn the truth behind the android’s intentions. Choose between three ships and enter a fast-paced bullet hell as you battle against the Elemental Daughters. Several game modes offer different scoring and challenges, and you can play together in co-op mode.

Loot, shoot, and dodge roll your way through this fast-paced bullet hell and battle your way to the bottom of the Gungeon. Choose your Gungeoneer and discover their story of courage and desperation as you journey forward utilizing dozens of unique weapons and tactics. Unlock unique weapons, slay all that stand before you, and beat the ever-changing and ever-adapting procedurally generated dungeons.


Survive against the odds and tackle space pirates in this frantic and ever-moving space shooter. Play randomly generated levels, choose from five playable ships, dozens of weapons and upgrades, and fight epic bosses. Fight for a place on the leaderboards in daily runs, train against unlocked bosses in the arena, and play together in co-op.

Survive against the odds in brutal, fast-paced action, and fight your way towards the MOTHERGUNSHIP. Create guns of epic proportions, and take them into battle with you as you blast your way through alien machines, traps, and deadly bosses. Play solo or with a friend in co-op mode, and do everything you can to reach your goal.


Shoot through epic levels across mountains, dockyards, and nightmarish bases in this brutal shoot ‘em up. The difficulty system is tailored for you, adapting on the fly to give you the perfect challenge. Challenge yourself across several game modes designed to test your skills, compete on the online leaderboards, and unlock galleries and other rewards as you go.

A brutal arcade-style twin-stick shooter, Nex Machina is a test for your skills, reflexes, and determination. The action is fast-paced, the levels brutal, and the enemies unrelenting.

What is a Shoot ’em Up Game?

In a shoot ‘em up, a player must kill overwhelming numbers of enemies by constantly attacking and evading. 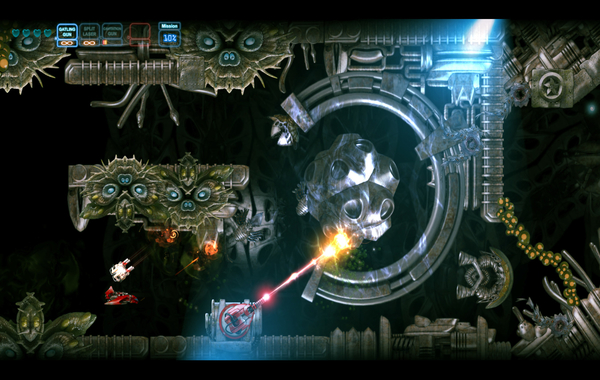 These games are often top-down or side-view perspective and encourage the player to be persistently shooting as enemies move onto screen.

Players can commonly pick up temporary power-ups as they progress through levels, including shields, weapon upgrades, and even extra lives.

We can place shoot ‘em ups into some of the following categories:

Why Are We Doing a Top 15 Shoot ’em UpGames List?

Shoot ’em Up Games are available at incredible prices, but with so many to choose from, we want to help you pick the game that’s right for you.

Not really such a big fan of Shoot ’em up games to be honest. Though that said; Cuphead is definitely an exception – great cartoony art-style, challenging difficulty level (matching Dark Souls!) and much fun to play coop on the couch (and frustration if the other person dies more than you 😅)!

I was drawn to Cuphead since the first moment I watched its release trailer back in 2017, mainly because of the art style. I was intrigued by the old cartoon aesthetic and it managed to recreate that feeling perfectly.
So I bought the game and realized that its art style was only one of the many things it had to offer. It is fun, original and very addicting. I enjoyed its surreal world, unforgiving enemies and impeccable animations for many hours but what made me keep playing was its brutal difficulty.
Of course, it is not a game for everyone but those who insist and don’t quit will be rewarded. The real fun began just when I finished the game and started over with a friend this time.
It deserves all the praise and recognition it has received.

Hmm, look’s interesting. Can’t wait to try some of them. Discord: Hubbdidei#7353

Enter the gungeon looks cool; would definitely try it out soon:) thanks aks!