15 of the Best Shoot ’em Up Games and Compare Prices 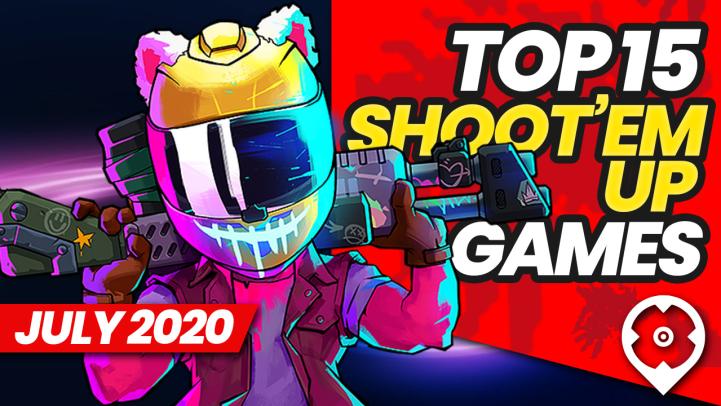 The classic arcade space shooter returns with Nova Drift, with dying stars, deadly foes, and an ever-evolving bio-mechanical ship. Customize and create your build, utilizing drones, shields, thrusters, and more than 200 upgrades as you shoot your way through enemies in randomly generated runs. Play through a vibrant campaign or discover rewards across challenges in a game where everything is possible.

Discover a world where plants sit on top of the food chain, and humans are ripe for picking, in this beautiful looking roguelike that tasks players with defeating fruit and restoring order. Play a whacky campaign with local multiplayer support, unlock weapons, items, and treasures, and defeat the fruit in randomized zones. Uncover the secrets of a new world and save humanity.

Challenge yourself across 15 missions, unlock new difficulty modes, and battle gigantic bosses alone or with a friend in this classic-inspired shoot ‘em up. Choose from nine aircraft, each with unique features, select hundreds of weapons, shields, and items, and discover 30 bonus cards that will grant boosts and abilities. Enjoy endless replayability with weekend tournaments offering an infinite number of challenges.

Go postal with a brand new town, dark secrets, and strange locals to discover in the open-world setting of Postal 4: No Regerts. Featuring the voice of Jon St. John (Duke Nukem), wield familiar weapons of the franchise such as the shovel, gas can, and boomerang machete, power them up and wreak havoc on the town with complete disregard for the locals. Complete errands, finish side quests, feed stray dogs, and decide whether to use lethal or non-lethal force in the latest over-the-top Postal title.

Play to your music and use the tune of the songs to power up your spaceship, increase your firepower, and smash your way through enemies using the beat’s power. The song will decide your unique spaceship, every song has its leaderboard, and there are daily challenges to compete in that offer exclusive ships. Put your favorite track on, challenge a friend, and use the beats to dominate the leaderboards.

Take to the skies in your Apache or Hoku helicopter and save the world from the terrorist group, Revolution, in this old-school shoot ‘em up that reminds of Desert Strike and Jungle Strike. Fight through missions featuring day and night cycles, and weather conditions, using a combination of weapons, armor, decoys, and stealth. Test your skills with the game’s fuel and ammunition limits, and save the world alone or with a friend in an objective-rich campaign.

Drive deeper into the facility in this procedurally generated top-down action shooter, featuring dangerous enemies, deadly weapons, and secrets of a forgotten past. Discover various weapons, dozens of unique upgrades and combinations, and avoid traps as you venture further down. Get the DLC and battle new enemies, new bosses, new modes, new playable character, and uncover more than 2000 new room layouts.

The arcade blasts its way onto Steam with Metal Slug, the classic run and gun action shooting game. Upgraded for PC, battle your way through the intense campaign alone or in online co-op, select your missions once unlocked, and compete on the leaderboards to be the best. Metal Slug is the must-have game for those who miss the days of the arcade classics.

Shoot ‘em ups don’t come more hardcore than Planes, Bullets and Vodka, with support for keyboard and joysticks, and infinite levels. Play for glory and climb the online leaderboards, kill endless waves of enemies and unlock score multipliers, earn power-ups, and fight through increasingly difficult randomly generated paths. Enter this true bullet hell game, where the only reward for surviving is harder enemies.

Metal Slug 3 moves to PC, offering the classic arcade game with updated features and online multiplayer. Complete five challenging missions, with new paths to discover, battle bosses, and climb the online leaderboards to become the number one soldier. Survive the hail of bullets and relive the old days of gaming in this ever-popular classic shoot ‘em up.

Survive against the odds against aliens, zombies, mutant lizards, and giant spiders in this top-down action shooter. Level up, unlock perks and discover dozens of unique weapons across quest and survival game modes. Increase your arsenal and battle through enemies with full controller and up to 4-player local co-op support. In Crimsonland, the only way to survive is to kill.

Take retro to a new level with Cyberhunt, a twin-stick shooter set in a cyberpunk world full of cops, asteroids, and pixel graphics. Destroy endless waves of randomly spawned enemies across 500 challenging missions, with plenty of Steam Achievements to unlock and Steam leaderboards available. Earn power-ups, equip new weapons, and survive as long as possible, any way possible.

A shoot ‘em up is a type of video game where the player character needs to shoot as fast and as often as possible, with a ranged weapon, if they are to survive.

Shoot ‘em up is a subgenre of shooting games and can be found in many other genres, including space simulator, adventure, action, arcade, first-person, and third-person.

Shoot ‘em up video games have been around since the beginning of arcade games, with Space Invaders being one of the earliest and possibly the most well-known in the shoot ‘em up genre.

The genre continues to be very popular today, with many recent games that have seen great success, including Cuphead, Jets’n’Guns 2, POSTAL 4: No Regerts, and Ikaruga.

The genre is well-known for its difficulty in games such as bullet hell shoot ‘em ups. In these, the entire screen is filled with enemy bullets, placing the player in an almost impossible position to survive.

Run and gun games, which are mostly side-scrolling games, has the player character always moving towards the enemy, continually shooting, all-while avoiding the projectiles themselves. An example of this is the Metal Slug series of games, which has seen a massive surge in popularity since its launch on Steam.

Shoot ‘em ups are not for the casual gamer; they often have hardcore followings and take dedication to complete. However, anybody wanting a challenge should try the shoot ‘em genre as they typically feature leaderboards, high scores, and co-op play for those that want to play with a friend.

Why Are We Doing a Top 15 Shoot ’em Up Games List?

In the world of Shoot ’em up, fantastic games can be found at incredible prices but you can also be at a greater risk of being left disappointed.