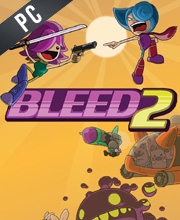 It's a digital key that allows you to download Bleed 2 directly to PC from the official Platforms.

How can I find the best prices for Bleed 2 CD keys?

Allkeyshop.com compares the cheapest prices of Bleed 2 on the digital downloads market to find the best sales and discount codes on trusted stores.

Bleed 2 is a run and gun style shoot ’em up game made by indie developer Ian Campbell the sequel to his first game Bleed, Wyrn after the events of the first game is now earth’s only official superhero but now a new villain has invaded earth psychic girl named valentine, her posse of alien invaders, and some familiar faces, it’s time to prove your title as earth’s greatest hero of all time.

Bleed 2 is a great choice for anyone who loves extremely fast-paced action games that reward skill. Particularly if you’ve ever wanted to quadruple jump a path through a swarm of gunfire and flaming wreckage, riddle a bunch of enemies with bullets in slow motion, and finish off a hostile helicopter by deflecting one of the dozen missiles it’s launched that you back in its freaking face with your sword before touching the ground. It’s that kind of game.

At the core, Bleed 2 is still in the same spirit as the first entry, but just a bit more grown-up and comfortable. Wryn is still the same cool chick she always was, ready to kick some you-know-what as before, except this time for less selfish reasons. The action anti-heroine has become a real heroine, and the bosses have got more creative and include more variety.

Zoom 1m 3m 1y All
Track product
EU STEAM CD KEY: Requires an EUROPEAN IP address or you must activate it with a VPN (Virtual Private Network) in order to play Bleed 2. Might have languages restrictions or language packs. Read the description on the store game page to know if the EU IP is only needed for activation or for playing also (maybe on EU Servers). Most of the stores offer you their help, or show you how to do this with a tutorial to follow.
STEAM GIFT : A Steam gift is a one-time transfer you receive. You activate and install Bleed 2 to play on Steam, it is a non-refundable game that stays in your Steam games collection. Please read the store description about any language or region restrictions.
STEAM CD KEY : Use the Steam Key Code on Steam Platform to download and play Bleed 2. You must login to your Steam Account or create one for free. Download the (Steam Client HERE). Then once you login, click Add a Game (located in the bottom Left corner) -> Activate a Product on Steam. There type in your CD Key and the game will be activated and added to your Steam account game library.
Standard Edition
Compare Choose & Buy Download (743)