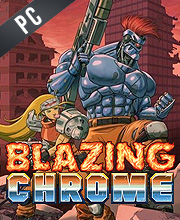 What is Blazing Chrome CD key?

It's a digital key that allows you to download Blazing Chrome directly to PC from the official Platforms.

How can I find the best prices for Blazing Chrome CD keys?

Allkeyshop.com compares the cheapest prices of Blazing Chrome on the digital downloads market to find the best sales and discount codes on trusted stores.

Blazing Chrome is an action video game that is developed by Jay Masher and published by The Arcade Crew.

Welcome to the world where humans are expandable and machine are the rulers of the world. An AI army has taken over the world and humans are forced to go into hiding in order to survive. The remaining humans hear about the huge powerplant where the AI’s get their power. They plan on destroying it however the machines were able to attack the camp before their plans pushed through. Only a few survive, so they are more than determined to destroy the power plant.

There are two characters to choose from: Marva who is a resistance soldier and the other is Doyle a robot turned rogue to his fellow machines. Together you must strive for humanity’s freedom.

The fate of the whole world and humanity is in your hands.

Zoom 1m 3m 1y All
Track product
GOG.COM CD KEY : You need to register on Gog.com, then use the GOG Key to download and activate your game to play Blazing Chrome.
EU STEAM CD KEY: Requires an EUROPEAN IP address or you must activate it with a VPN (Virtual Private Network) in order to play Blazing Chrome. Might have languages restrictions or language packs. Read the description on the store game page to know if the EU IP is only needed for activation or for playing also (maybe on EU Servers). Most of the stores offer you their help, or show you how to do this with a tutorial to follow.
STEAM CD KEY : Use the Steam Key Code on Steam Platform to download and play Blazing Chrome. You must login to your Steam Account or create one for free. Download the (Steam Client HERE). Then once you login, click Add a Game (located in the bottom Left corner) -> Activate a Product on Steam. There type in your CD Key and the game will be activated and added to your Steam account game library.
Windows 10 Global : This is an Worldwide Microsoft code to play on PC for Worldwide . You need to have installed Windows 10 Anniversary Edition update on your PC. Log into your Microsoft account to download and play. Read closely the description given by the store to activate your game.
Standard Edition
Compare Choose & Buy Download (772)

Blazing Chrome reminds me of first Contra game, well I think they made it based on Contra, I like the old school pixel graphics and 2D gameplay, this game will sure bring back some good memories and nostalgia, the price is insanely high from the only store here GMG, hope more stores will be added soon and more reasonable deals!