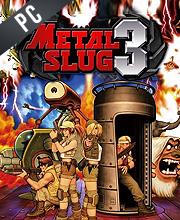 What is Metal Slug 3 CD key?

It's a digital key that allows you to download Metal Slug 3 directly to PC from the official Platforms.

How can I find the best prices for Metal Slug 3 CD keys?

Allkeyshop.com compares the cheapest prices of Metal Slug 3 on the digital downloads market to find the best sales and discount codes on trusted stores.

Metal Slug 3 is an action shooting game in 2D developed by DotEmu and published by SNK Playmore.

The story takes place after the second attempted coup by General Morden. The government has tried to stifle the words that the army Rebel was helped by aliens. There have been several kidnappings of characters and the stunning appearance of giant crustaceans.

The 4 heroes of the previous installment are sent on a mission to capture Morden, but once found, it appears that it was an alien who arrived to conquer Earth. The government sends you into space to destroy these aliens!

Many new features make their appearances in this opus:

New transport (elephant..) Different possible paths through each level New types of enemies New prisoner: the businessman The possibility of being turned into a zombie

Metal Slug 3 has a ranking of scores as an arcade game, except that it is a world ranking via the internet.

It is the most successful game in the Metal Slug series because of its balance and its sound effects.

If you like to shoot from anywhere and any blow with a good challenge to the key, Metal Slug 3 is for you!

Zoom 1m 3m 1y All
Track product
GOG.COM CD KEY : You need to register on Gog.com, then use the GOG Key to download and activate your game to play Metal Slug 3.
EU STEAM CD KEY: Requires an EUROPEAN IP address or you must activate it with a VPN (Virtual Private Network) in order to play Metal Slug 3. Might have languages restrictions or language packs. Read the description on the store game page to know if the EU IP is only needed for activation or for playing also (maybe on EU Servers). Most of the stores offer you their help, or show you how to do this with a tutorial to follow.
STEAM GIFT : A Steam gift is a one-time transfer you receive. You activate and install Metal Slug 3 to play on Steam, it is a non-refundable game that stays in your Steam games collection. Please read the store description about any language or region restrictions.
STEAM CD KEY : Use the Steam Key Code on Steam Platform to download and play Metal Slug 3. You must login to your Steam Account or create one for free. Download the (Steam Client HERE). Then once you login, click Add a Game (located in the bottom Left corner) -> Activate a Product on Steam. There type in your CD Key and the game will be activated and added to your Steam account game library.
STEAM KEY ROW : It means for Rest Of the World countries which are not concerned by the region restrictions. This product can't be purchased and activated in Several countries. Please read the store description to know the full list of countries which are concerned. Use the key to Download and play Metal Slug 3 on Steam.
Bundle
Complete Edition
Pack X2
Standard Edition
Steelbook Edition
Compare Choose & Buy Download (772)

the best of metalslug, the gameplay, boss,arms and pj soo perfect ! 😀

Good game, got it free from giveaway, and i have finished campaign, nice game indeed. 5stars