15 of the Best Funny Games and Compare Prices

“You want to play a Funny Games, but don’t know which one to choose?

Luckily Allkeyshop is here to help you with this top 15 of the best Funny Games!”

Play the ultimate betrayal game as ten players enter and try and prepare their spaceship for departure, unaware that imposters are among the group. As a crewmate, complete tasks, whether alive or dead, keep an eye on other crewmates and vote to eject the imposters before they kill everyone onboard. As an imposter work alone or with others, and use sabotage, deceit, and stealth to divert suspicion and kill the crewmates.

Among Us System Requirements

Act as warden and contain the world’s most dangerous criminals in your very own personalized maximum security prison. Manage your prison and use federal money and grants to hire staff, fight disease, combat floods, and suppress gang activities. Expand your prison across several game modes, including sandbox and online modes that offer thousands of player-created supermax prisons.

Trip your way to victory in this colorful and whacky free-for-all party game. Battle through obstacles, shove your opponents and defy physics as you laugh your way through 60 player arenas to become the victor. Customize your Fall Guy, compete in chaotic free-for-alls, and bounce your way through cooperative challenges, all in the name of fun.

Play with no script and no limits in this quirky, open-ended physics-based puzzle platformer for up to 8 players. Customize your human’s head, body, and colors. Build content, share it with the world, or download creations via the Human: Fall Flat Workshop.


Fight to the death against other sticks and earn the victory in fast-paced physics-based multiplayer combat. Battle across 100 interactive levels using assault rifles, pistols, and melee weapons. Create your very own levels or play on one of more than 20,000 community-made levels.


This is not golf. This is an absurd reimagining of the sport with over-the-top physics, whacky levels, ridiculous mechanics, and slapstick humor. Play through the crazy single-player campaign or play with a friend in couch play or Remote Play Together. The game features daily challenges, hundreds of levels, a level editor, and plenty of laughs.

WHAT THE GOLF? System Requirements


Direct the news in this hilarious multi-tasking simulator, where you control the nightly news and choose the angles, the headlines, and bleep the swear words. Choose the stories to run, the ads to play, and continue the broadcast at all costs. The lives of those you air will be changed forever based on how you decide to show them. Talk up the footballer, reveal his affair, the choice is yours.

Not For Broadcast System Requirements


Dive into the world of video game development in the 1970s and build your company into a global powerhouse. Build any game, from text-based RPGs to MMOs, and choose to launch them for consoles or PC. Hire new developers, sell your engine to rivals, manage pollution, and find larger offices as your company grows.

Play as a goose and wreak havoc amongst the village and its people. Steal hats, pull pranks, honk at unsuspecting victims, and strut around the gardens – all as a goose. Play with a friend and together ruin everyone else’s day by terrorizing the locals.

What is a Funny Game? 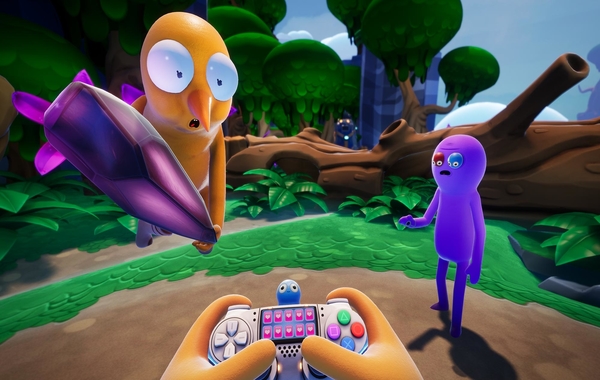 Multiplayer games tend to focus on party-based gameplay and feature a simple story or objective.

Funny games that present humor through gameplay often make it exaggerated and over-the-top.

Why Are We Doing a Top 15 Funny Games List?

Funny Games are available at incredible prices, but with so many to choose from, we want to help you pick the game that’s right for you.