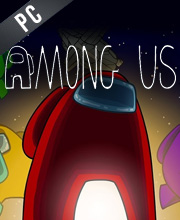 What is Among Us CD key?

It's a digital key that allows you to download Among Us directly to PC from the official Platforms.

How can I find the best prices for Among Us CD keys?

Allkeyshop.com compares the cheapest prices of Among Us on the digital downloads market to find the best sales and discount codes on trusted stores.

Prepare your spaceship for departure with your Crew. Beware as there are imposters in your crew and are wanting to kill all of you.

The Starter Pack includes Among Us, the Hamster Pet Bundle, the Polus Skins and the MIRA HQ Skins.

Among Us Hamster Pet Bundle

Among Us Hamster Pet Bundle includes a pet dog and hamster. Only one can be equipped at a time.

Among Us Bedcrab Pet Bundle

Among Us Bedcrab Pet Bundle includes the Bencrab and Squicq pets. Only one can be equipped at a time.

Among Us Polus Skins

Among Us Polus Skins includes the archaeologist Polus that can unearth information about xenoforms. This also comes with warm, winter gear, and mining outfit.

Find all the best prices for Among Us DLCs on Allkeyshop!

EU STEAM CD KEY: Requires an EUROPEAN IP address or you must activate it with a VPN (Virtual Private Network) in order to play Among Us. Might have languages restrictions or language packs. Read the description on the store game page to know if the EU IP is only needed for activation or for playing also (maybe on EU Servers). Most of the stores offer you their help, or show you how to do this with a tutorial to follow.
EUROPEAN STEAM GIFT : It’s a steam gift for Europe which requires an European IP address to activate and to play Among Us on Steam. Read carefully the store description about region and language restrictions.
STEAM GIFT : A Steam gift is a one-time transfer you receive. You activate and install Among Us to play on Steam, it is a non-refundable game that stays in your Steam games collection. Please read the store description about any language or region restrictions.
STEAM CD KEY : Use the Steam Key Code on Steam Platform to download and play Among Us. You must login to your Steam Account or create one for free. Download the (Steam Client HERE). Then once you login, click Add a Game (located in the bottom Left corner) -> Activate a Product on Steam. There type in your CD Key and the game will be activated and added to your Steam account game library.
Windows 10 Global : This is an Worldwide Microsoft code to play on PC for Worldwide . You need to have installed Windows 10 Anniversary Edition update on your PC. Log into your Microsoft account to download and play. Read closely the description given by the store to activate your game.
PC Win 10 / Xbox Key. Digital code which allows you to play on both Xbox and Windows 10 PC. See below for more informations.
Pack X4
Standard Edition
Compare Choose & Buy Download (723)

Great game that follows the “trouble in terrorist town” genre. It really follows up to the hype that it have gotten in the past month.

Really fun game to play with somebody, especially if you’re looking for revenge.

If you want to increase your skill in lying and being a bad ass… then this game is absolutely the one you should get. It’s extremely funny and remember: “RED IS SUS!”

Fun game if you have a group big enough to play with. Would also definitely recommend getting the actual game on PC as opposed to using the free one on mobile. Moving around is just so much easier.

I wouldn’t recommend purchasing this game unless you have a legitimate group to play with as playing through chat as opposed to discord, just isn’t the same!
Other than that fantastic game, entertaining to boot