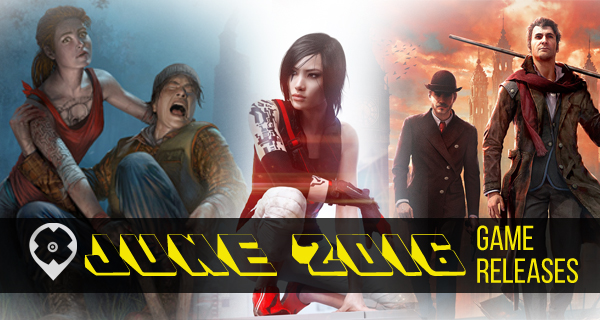 Get ready for these upcoming June 2016 video games!

We’re almost halfway through the year 2016, and so far new and big titles have dominated the gaming scene for the past months. Upcoming June 2016 video games are no different. Wondering what’s in store for you this June? Well, for starters, the much-awaited Mirror’s Edge Catalyst is definitely one of the most exciting games from the bunch. There are also other titles you can get excited about, such as Hearts of Iron 4, and Resident Evil Umbrella Corps. Do look forward to other games we’ve included on our list as well, ’cause we’re sure they’re also out there to entertain you.

What’s Hot? This strategy game is set in World War II. You can choose any nation in WWII and wage war against other nations in air, land, and sea battles.

Release Date: 7 June 2016 (NA), 9 June 2016 (EU) What’s Hot? Mirror’s Edge Catalyst’s launch trailer, “Why We Run”, highlights not only some of the awesome gameplay you can expect from the game, but also the story of  Faith Connor’s origin.

What’s Hot? Sherlock Holmes The Devil’s Daughter promises a gameplay like no other as you get to take on the role of Sherlock Holmes one more time. Expect interrogations, chases, combat, and infiltration as you gather clues and search for suspects  in its free-to-explore environment.

What’s Hot? Dead by Daylight is a 4 vs. 1 multiplayer game. 1 player plays as the killer, while the other 4 players play as survivors.

What’s Hot? If you’re a fan of classic Japanese 2D scrolling games, then Mighty No. 9 just might be of interest to you. Beating the game unlocks a New Game+ mode where you’ll get to challenge yourself to even challenging battles.

What’s Hot? Zombies are making a comeback this month with Umbrella Corps, a competitive multiplayer shooting game. This game is a spin-off of the Resident Evil series and is set two years after the events on Resident Evil 6.

What’s Hot? The Technomancer is a sci-fi role-playing game set in the planet Mars. You will play as one of the Technomancers. Technomancers are mage-warriors that have the ability to use electrical powers that are enhanced by their cybernetic implants. The game features three combat styles, four unique skill trees, perks, companions, and more.

June is truly going to be another month full of action and adventure. Which of these games are you excited about?