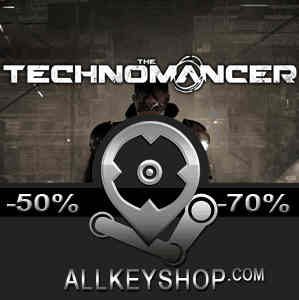 What is The Technomancer CD key?

It's a digital key that allows you to download The Technomancer directly to PC from the official Platforms.

How can I find the best prices for The Technomancer CD keys?

Allkeyshop.com compares the cheapest prices of The Technomancer on the digital downloads market to find the best sales and discount codes on trusted stores.

The Technomancer is an action, role-playing videogame. Developed by Spiders and published by Focus Home Interactive.

The game is set in Mars during the Water War about 200 years from the time that humans decided to stay in Mars. The Red Planet now a wasteland. Scattered on its surface are the ruins of yesteryear’s establishments.

Play as Zachariah a rookie technomancer who is on his way to become a true technomancer. Technomancers are considered “mage-warriors” they have the ability to harness electrical powers that are enhanced by cybernetic implants. Zachariah will find himself in the Ancient Domes, a sacred place for technomancers, for his initiation.

You will be joined by a few companions to form a party. The extra characters are also allowed to level up. Crafting is also a feature of the game which will allow you to create armor and weapons. The game will also feature three types of combat which are staff, blade/gun, and blade/shield. The choices you make in the game will define the direction of its flow, as the game will have five different endings.

Zoom 1m 3m 1y All
Track product
GOG.COM CD KEY : You need to register on Gog.com, then use the GOG Key to download and activate your game to play The Technomancer.
STEAM EN KEY : Steam EN Key to download and play The Technomancer in English language only. Read the store description carefully about language and restrictions.
EU STEAM CD KEY: Requires an EUROPEAN IP address or you must activate it with a VPN (Virtual Private Network) in order to play The Technomancer. Might have languages restrictions or language packs. Read the description on the store game page to know if the EU IP is only needed for activation or for playing also (maybe on EU Servers). Most of the stores offer you their help, or show you how to do this with a tutorial to follow.
STEAM CD KEY : Use the Steam Key Code on Steam Platform to download and play The Technomancer. You must login to your Steam Account or create one for free. Download the (Steam Client HERE). Then once you login, click Add a Game (located in the bottom Left corner) -> Activate a Product on Steam. There type in your CD Key and the game will be activated and added to your Steam account game library.
STEAM POLAND CD KEY : Steam Key from Poland to download and play The Technomancer with English and Polish language only. Read the store description carefully about languages and restrictions.
Standard Edition
Compare Choose & Buy Download (743)

The story takes off once you get outside Ophir – before that it is almost boring just finding ways to build your skills up – well worth playing though and some interesting characters.

Go to Instant Gaming and Technomancer at the best price possible! And always use allkeyshop to know the best prices for all games!

Looks like InstantGaming is the best for the Technomancer right now.

InstantGaming would be the best as it is currently the cheapest! Just make sure to always opt for buyer protection from whoever you buy from if you have the option!