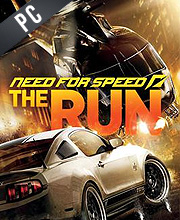 What is Need for Speed : The Run CD key?

It's a digital key that allows you to download Need for Speed : The Run directly to PC from the official Platforms.

How can I find the best prices for Need for Speed : The Run CD keys?

Allkeyshop.com compares the cheapest prices of Need for Speed : The Run on the digital downloads market to find the best sales and discount codes on trusted stores.

Need for Speed: The Run is a racing video game, is the eighteenth title in the long-running Need for Speed franchise, and developed by Canadian EA subsidiary EA Black Box and published by Electronic Arts.

The game was directed by action director Michael Bay and was described as an “illicit, high-stakes race across the country. The only way to get your life back is to be the first from San Francisco to New York. No speed limits. No rules. No allies. All you have are your driving skills and sheer determination”.

Players take part in street racing across real world locations in the United States. There are over 300 kilometers (190 mi) of road, three times more than Hot Pursuit, making it the biggest Need For Speed game on release. Most event types require the player to overtake opponents to win the race. There are also time attack events and survival events where the players must prevent their vehicle from being destroyed while under attack. Cars are divided into tiers based on performance.

During a race, the player can enter a gas station to change the vehicle they are using and make visual customization. Unlike previous Need for Speed titles, The Run features sections where the player exits their car and is travelling on foot. Gameplay in these sections is restricted to quick time events.

good game,graphics are pretty nice ,gameplay and story are just ok,but still a must play game

NICE GAME BUT TOO SHORT…