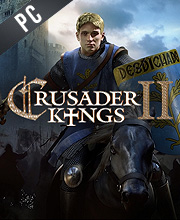 You can participate to these tests by adding comments about your digital download purchase in the store review page. Enjoy the best deals for Crusader Kings 2 CD Key with Allkeyshop.com!

The game is a dynasty simulator where the player controls a Medieval dynasty from 1066 to 1453, though the DLC The Old Gods and Charlemagne allow for a start date of 867 and 769, respectively.

Through the strategic use of war, marriages and assassinations among many other things, the player works to achieve success for his or her dynasty. The game contains numerous historical figures such as William the Conqueror, Charlemagne, Harold Godwinson, Robert Guiscard, Harald Hardrada, El Cid, Constantine X Doukas, Harun al-Rashid, Alexios I Komnenos, Alfred the Great, and Saladin, but allows for the development of fictional characters as well.

The simulation is open-ended so the definition of ‘success’ is completely defined by the player. The only in-game objective is to obtain as many prestige points as possible in order to surpass the various historically relevant European dynasties in a fictional prestige ranking (the three most prestigious ones being the Capetian, the Rurikovich and the Habsburg dynasties). The game ends when the player’s current character dies without an heir of the same dynasty to succeed him/her, or when the in-game year changes to 1453.

Go back in time and see if you can conquer the dynasties of the Middle Ages.

Region
Steam : STEAM CD KEY : Use the Steam Key Code on Steam Platform to download and play Crusader Kings 2. You must login to your Steam Account or create one for free. Download the (Steam Client HERE). Then once you login, click Add a Game (located in the bottom Left corner) -> Activate a Product on Steam. There type in your CD Key and the game will be activated and added to your Steam account game library.


Steam EU : EU STEAM CD KEY: Requires an EUROPEAN IP address or you must activate it with a VPN (Virtual Private Network) in order to play Crusader Kings 2. Might have languages restrictions or language packs. Read the description on the store game page to know if the EU IP is only needed for activation or for playing also (maybe on EU Servers). Most of the stores offer you their help, or show you how to do this with a tutorial to follow.


Steam ROW : STEAM KEY ROW : It means for Rest Of the World countries which are not concerned by the region restrictions. This product can't be purchased and activated in Several countries. Please read the store description to know the full list of countries which are concerned. Use the key to Download and play Crusader Kings 2 on Steam.


Collection : Collection. Read the store description to know the content.

2 bucks for this game is a great deal. the 2nd best game paradox has to offer after europa universalis 4. great to learn history 😀