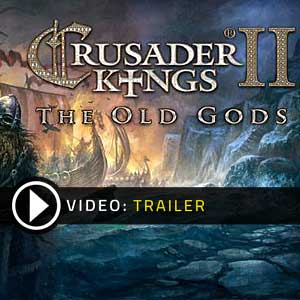 What is Crusader Kings 2 The Old Gods CD key?

It's a digital key that allows you to download Crusader Kings 2 The Old Gods directly to PC from the official Platforms.

How can I find the best prices for Crusader Kings 2 The Old Gods CD keys?

Allkeyshop.com compares the cheapest prices of Crusader Kings 2 The Old Gods on the digital downloads market to find the best sales and discount codes on trusted stores.

Crusader Kings II: The Old Gods is a grand strategy game set in the Middle Ages developed by Paradox Development Studio and published by Paradox Interactive.

This DLC allows you to play as Pagans. This means you can now play as Vikings, Mongols, Slavs, Zorastrians, Sami, and Romuvan. If you have the ruler designer there are also a couple more less fleshed out pagans to play as too. But the real kicker is the ability to play as Norse and the Tengri (Mongols).

The Old Gods expansion for Crusader Kings 2 is a must have if you own the base game. It takes you back into the early 800s when the Vikings reigned supreme. Get access to Norse religion events and other pagans. Take up to three concubines and go pillaging. Your people will be in trouble if you don’t declare war enough.

As Europe goes into complete chaos a battle of supremacy begins. Declare your intention to invade and watch your armies grow with adventurers and restless warriors, but don’t wait too long to start your war or it might all fall apart. Loot and pillage provinces. Burn down cities and take their gold! It’s complete mayhem! And now is your chance to rule them all!

Zoom 1m 3m 1y All
Track product
EU STEAM CD KEY: Requires an EUROPEAN IP address or you must activate it with a VPN (Virtual Private Network) in order to play Crusader Kings 2 The Old Gods. Might have languages restrictions or language packs. Read the description on the store game page to know if the EU IP is only needed for activation or for playing also (maybe on EU Servers). Most of the stores offer you their help, or show you how to do this with a tutorial to follow.
EUROPEAN STEAM GIFT : It’s a steam gift for Europe which requires an European IP address to activate and to play Crusader Kings 2 The Old Gods on Steam. Read carefully the store description about region and language restrictions.
STEAM GIFT : A Steam gift is a one-time transfer you receive. You activate and install Crusader Kings 2 The Old Gods to play on Steam, it is a non-refundable game that stays in your Steam games collection. Please read the store description about any language or region restrictions.
STEAM CD KEY : Use the Steam Key Code on Steam Platform to download and play Crusader Kings 2 The Old Gods. You must login to your Steam Account or create one for free. Download the (Steam Client HERE). Then once you login, click Add a Game (located in the bottom Left corner) -> Activate a Product on Steam. There type in your CD Key and the game will be activated and added to your Steam account game library.
Bonus Edition
Collection
DLC
Imperial Collection
Royal Collection
Compare Choose & Buy Download (759)

Best Downloadable contact for the game and great prices.
thank you allkeyshop!