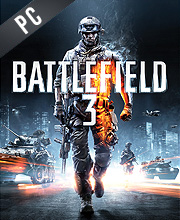 What is Battlefield 3 CD key?

It's a digital key that allows you to download Battlefield 3 directly to PC from the official Platforms.

How can I find the best prices for Battlefield 3 CD keys?

Allkeyshop.com compares the cheapest prices of Battlefield 3 on the digital downloads market to find the best sales and discount codes on trusted stores.

Battlefield 3 is a first-person shooter video game developed by EA Digital Illusions CE and published by Electronic Arts. It is a direct sequel to 2005’s Battlefield 2, and the eleventh installment in the Battlefield franchise.

In Battlefield 3‍ ’s campaign, players take on the personas of several military roles: a U.S. Marine, an F-18 weapons system officer, an M1A2 Abrams tank operator, and a Spetsnaz GRU operative. The campaign takes place in various locations, including Iran to New York City; and follows the stories of Sergeant Henry Blackburn and Dimitri Mayakovsky.

The Engineer class focuses on supporting and destroying vehicles. The Recon class focuses on sniping and spotting enemies. The mechanics of the weapons have been changed to utilize the new engine: compatible weapons may have bipods attached which can then be deployed when in the prone position or near suitable scenery, and provide a significant boost to accuracy and recoil reduction. Suppressive fire from weapons blurs the vision and reduces the accuracy of those under fire, as well as health regeneration.

Limited: Battlefield 3 + Back to Karkand DLC

Uncut: Uncensored version; unavailable in some countries. Please refer to the seller’s website

Zoom 1m 3m 1y All
Track product
EU ORIGIN CD KEY (EUROPEAN ORIGIN CD KEY): Requires an European IP address or you must activate it with a VPN (Virtual Private Network) in order to play Battlefield 3. Might have languages restrictions or language packs. Read the description on the store game page to know if the EU IP is only needed for activation or for playing also (maybe on EU Servers). Most of the stores offer you their help, or show you how to do this with a tutorial to follow.
ORIGIN CD KEY : Use the Origin Key Code (Electronic Arts - EA) on Origin Platform to download and play Battlefield 3. You have to login to your Origin Account or create one for free. Download and install the Origin Software HERE) then you can activate the game on it. Once installed, start Origin, click on the Origin Tab and click on Redeem Product Code and just enter the key. The game will appear in your My games list.
STEAM GIFT : A Steam gift is a one-time transfer you receive. You activate and install Battlefield 3 to play on Steam, it is a non-refundable game that stays in your Steam games collection. Please read the store description about any language or region restrictions.
STEAM CD KEY : Use the Steam Key Code on Steam Platform to download and play Battlefield 3. You must login to your Steam Account or create one for free. Download the (Steam Client HERE). Then once you login, click Add a Game (located in the bottom Left corner) -> Activate a Product on Steam. There type in your CD Key and the game will be activated and added to your Steam account game library.
Bundle
Limited Edition
Limited Edition + DLC
Premium Edition
Standard Edition
Uncut Edition
Compare Choose & Buy Download (803)

I have bought the game because it’s very very cheap here. very hard to get started on MP since you play against veterans with more hours clocked on this game than i could ever imagine.

Like battlefield 4, battlefield 3 is an awsome game.I like those two over others battlefield games because they are modern warfare.

This is one of my favorite FPS on of the best Battlefield , love to play with friends!

For which console is this cd key coss i have battlefield 3 for pc ??

Hi Ricardo, this is for PC. We also have Xbox 360 and PS3 for other platforms.