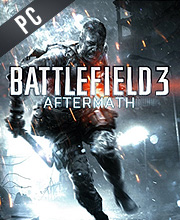 It's a digital key that allows you to download Battlefield 3 Aftermath DLC directly to PC from the official Platforms.

How can I find the best prices for Battlefield 3 Aftermath DLC CD keys?

Allkeyshop.com compares the cheapest prices of Battlefield 3 Aftermath DLC on the digital downloads market to find the best sales and discount codes on trusted stores.

Battlefield 3: Aftermath is an extension of Battlefield 3 a FPS genre / Action video game developed by DICE and published by Electronic Arts.

It benefits from the realistic and beautiful graphics quality that the games in the series are known for. There is a lot of equipment, fashion, maps, vehicles, weapons for you to utilize in this extension. Pleasure in this game will only grow with the arrival of these new developments.

First four environments will provide beautiful scenery, well suited for a FPS game, with its advantages and disadvantages tactics, but also new weapons and a new ground vehicle. You may say that simply adding enviroments and weapons is not a revolution in itself, but the benefit of this expansion actually brings a revival, both graphic and at the level of post-apolitical atmosphere designed with the great care, which would make an entire game in itself.

Aftermath invites us to fight on maps that depict the city of Tehran after it was destroyed by the famous earthquake staged in the single player campaign. The other novelty is in the Plunder mode where you start each game with a simple gun.

The objective will be to seize the weapons that appear randomly around the various checkpoints and usually have only a very limited stock of ammunition, this mode will suit most players to retrieve maximum weapon as well become more accurate so that hey may more easily get rid of their opponents. A nice extension to prolong the pleasure of an album that is already well supplied and comfortable to play.

EU ORIGIN CD KEY (EUROPEAN ORIGIN CD KEY): Requires an European IP address or you must activate it with a VPN (Virtual Private Network) in order to play Battlefield 3 Aftermath. Might have languages restrictions or language packs. Read the description on the store game page to know if the EU IP is only needed for activation or for playing also (maybe on EU Servers). Most of the stores offer you their help, or show you how to do this with a tutorial to follow.
ORIGIN CD KEY : Use the Origin Key Code (Electronic Arts - EA) on Origin Platform to download and play Battlefield 3 Aftermath. You have to login to your Origin Account or create one for free. Download and install the Origin Software HERE) then you can activate the game on it. Once installed, start Origin, click on the Origin Tab and click on Redeem Product Code and just enter the key. The game will appear in your My games list.
ORIGIN KEY ROW : It means for Rest Of the World countries which are not concerned by the region restrictions. This product can't be purchased and activated in Several countries. Please read the store description to know the full list of countries which are concerned. Use the key to Download and play Battlefield 3 Aftermath on Origin.
DLC. (Downloadable content) It's an Add-on. You need the game in order to use it.

Be the first one to write a review about Battlefield 3 Aftermath DLC !