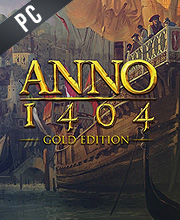 It's a digital key that allows you to download Anno 1404 Gold Edition directly to PC from the official Platforms.

How can I find the best prices for Anno 1404 Gold Edition CD keys?

Allkeyshop.com compares the cheapest prices of Anno 1404 Gold Edition on the digital downloads market to find the best sales and discount codes on trusted stores.

Anno 1404 (also known as Dawn of Discovery in North America) is a city-building and economic simulation with real-time strategy elements videogame of the Anno series developed by Related Designs and published by Ubisoft.

In this game, players get to play the acclaimed “Anno 1404 with its add-on: Meet the Orient and Venice” in only one pack. The main objective is to colonize islands, build huge metropolises, plan settlements, set up establishments to meet the citizens’ needs, rise up an alliance with other players, and engage in naval and ground combat with others. Choose to play in Co-op mode with up to four players and defeat the AI by planning strategies and merging battle techniques.

You will surely spend hours and hours of gameplay without getting bored for even just a second. Anno 1404 is very well devised with a deep and challenging management core. It has beautiful visuals and sound that complement each other well. Overall, its awesome gameplay makes this game recommendable for those who like RTS games.

Thanks for the report, i have informed the team for that.