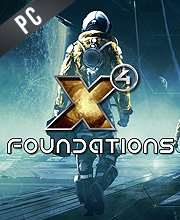 What is X4 Foundations CD key?

It's a digital key that allows you to download X4 Foundations directly to PC from the official Platforms.

How can I find the best prices for X4 Foundations CD keys?

Allkeyshop.com compares the cheapest prices of X4 Foundations on the digital downloads market to find the best sales and discount codes on trusted stores.

X4: Foundations is an action, simulation video game that is developed and published by Ego Soft. This is a sequel to the X series and it brings a universe simulation that is the most sophisticated ever.

Get to embark on an epic journey where you are able to fly every ship, deeply explore space and manage your very own empire. You must fight, trade, build and strategize carefully on your journey.

Get to personally fly all ships. Choose from the small ones to the huge ones like carriers. You can just leave a ship, climb down and transfer to another ship and fly it.

Build your space stations by earning enough money from trading or fighting. This time, you are now free to create your designs from the many modules available like production modules, living sections, docks, and many different types. A new map system is also available allowing you to just drag and connect each module for your unique creations.

There will be different races and factions which can be expanded. The economy has taken a step further with NPC economy being manufactured from resources.

X4: Foundations has many more to offer. Grab your copy now!

GOG.COM CD KEY : You need to register on Gog.com, then use the GOG Key to download and activate your game to play X4 Foundations.
EU STEAM CD KEY: Requires an EUROPEAN IP address or you must activate it with a VPN (Virtual Private Network) in order to play X4 Foundations. Might have languages restrictions or language packs. Read the description on the store game page to know if the EU IP is only needed for activation or for playing also (maybe on EU Servers). Most of the stores offer you their help, or show you how to do this with a tutorial to follow.
EUROPEAN STEAM GIFT : It’s a steam gift for Europe which requires an European IP address to activate and to play X4 Foundations on Steam. Read carefully the store description about region and language restrictions.
STEAM GIFT : A Steam gift is a one-time transfer you receive. You activate and install X4 Foundations to play on Steam, it is a non-refundable game that stays in your Steam games collection. Please read the store description about any language or region restrictions.
STEAM CD KEY : Use the Steam Key Code on Steam Platform to download and play X4 Foundations. You must login to your Steam Account or create one for free. Download the (Steam Client HERE). Then once you login, click Add a Game (located in the bottom Left corner) -> Activate a Product on Steam. There type in your CD Key and the game will be activated and added to your Steam account game library.
Anniversary Collection
Collector Edition
Standard Edition

Thanks for the links and everything! love this site 🙂

I haven’t played X series before, but hopefully if more stores get involved with the keys I can try it

This game has some really good deals currently, so buy it while it’s still cheap!

You know what is cool about AKS and their blogs? You see games you otherwise never heard off! This game looks fun to me since i’m a Star Citizen / Sci-Fi fan.