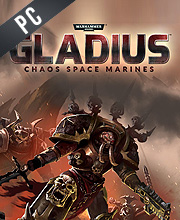 It's a digital key that allows you to download Warhammer 40K Gladius Chaos Space Marines directly to PC from the official Platforms.

How can I find the best prices for Warhammer 40K Gladius Chaos Space Marines CD keys?

Warhammer 40,000: Gladius – Chaos Space Marines is a strategy video game that is developed by Proxy Studios and published by Slitherine Ltd. This is a downloadable content so the base game which is Warhammer: 40,000: Gladius – Relics of War is needed in order to play.

A new faction is coming to Warhammer 40,000: Gladius and they are the Chaos Space Marines. They are ancient warriors that are ready to conquer Gladius Prime. They come with powerful machines having Warp powers as well as having so much experience in wars under their belt.

Get to prove yourself in the battlefield and you might get boons bestowed upon you by the Dark Gods. You could even rise to the rank of Daemon Prince. But if you are not considered worthy you might be used as a Chaos Spawn instead. The Chaos cities are there to glorify the Dark Gods and its population is just resource that can be used for unholy rites. Temporary boosts are given depending on the God that is worshipped. There are four Chaos Gods to choose from with unique buffs.

Be the first one to write a review about Warhammer 40K Gladius Chaos Space Marines !

Being one of the strategy games with the longest tradition I’m sure that Warhammer 40K Gladius won’t disappoint.

Interesting DLC to very good game, thank you allkeyshop for all giveaways.