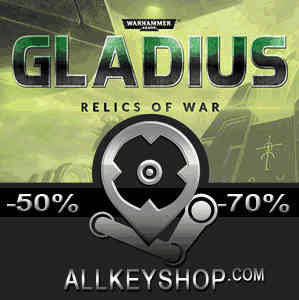 What is Warhammer 40K Gladius Relics of War CD key?

It's a digital key that allows you to download Warhammer 40K Gladius Relics of War directly to PC from the official Platforms.

How can I find the best prices for Warhammer 40K Gladius Relics of War CD keys?

Allkeyshop.com compares the cheapest prices of Warhammer 40K Gladius Relics of War on the digital downloads market to find the best sales and discount codes on trusted stores.

Warhammer 40,000: Gladius- Relics of War is a strategy video game that is developed by Proxy Studios and published by Slitherine Ltd.

Once known as a planet of archaeological interest, Gladius Prime wielded ancient relics during its time of colonization. The relics revealed a dark past for the planet and with it an unimaginable horror that dates back from the planet’s ancient past. Now, war covers this planet that was once peaceful.

Welcome to the world of horror and violence and choose out of the four factions to engage in the war for dominance over the planet and its vast resources.

Get to lead either the Astra Militarum, Space Marines, Orks, and Necrons. Each one of them will bring their own unique gameplay, technological tree, units, and heroes.

Fight in a 4x turn-based strategy game that is set in the Warhammer 40,000 world. Expand your empire by building cities, harvesting resources, and upgrading machinery. Get to command a wide array of weaponry and recruit hero units that can help you in your cause.

Strive for excellence and be the only faction left in Gladius Prime.

Be the first one to write a review about Warhammer 40K Gladius Relics of War !

Great deals i can’t wait to buy stuff from here. the prices are awesome

oh wow, it looks like a civ type turn based game set in the warhammer universe, this looks amazing!!!

hmmmm interesting, this game should be in my whislist so…

A very funny and interesting game for every Warhammer fan, at a great price, here on allkeyshop.