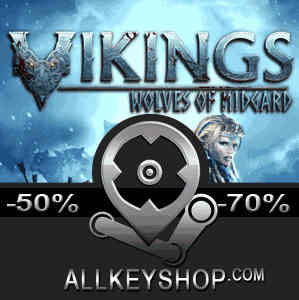 You can participate to these tests by adding comments about your digital download purchase in the store review page. Enjoy the best deals for Vikings Wolves of Midgard CD Key with Allkeyshop.com!

Vikings – Wolves of Midgard is an action role-playing video game developed by Games Farm and published by Kalypso Media Digital. Step into the world of Norse mythology with a mix of fantasy.

Play as the clan chief of Ulfung also known as the Wolves of Midgard. As legend has it, Jotan will make a comeback during the coldest winters and seek revenge on the Gods of Asgard. Caught in between is the earthly realm of Midgard. However, the Ulfung clan of Midgard will not hesitate to give their all to fight for their territory.

You will go against the monstrosities of Fimbulwinter. They are savage and will stop at nothing. You must be on your guard at all times. Collect the blood of your enemies and give them as offerings to the gods. This will greatly enhance your powers. Hit the rage mode and go crazy on your enemies. Equip amulets that have been infused with the power of the gods to give your character extra god-like strengths.

Play alone or with a friend in online co-op mode. Four difficulty levels will also be available to choose from, test your limits and see how far you can go.

Pre-order: Vikings: Wolves of Midgard + Viking Outfit (Can be different or change over time for each seller. Please refer to the seller’s website)

Be the first one to write a review about Vikings Wolves of Midgard !

Best website in whole internet! Hope to get a lot of games here! :DDDDD

InstantGaming are having the cheapest prices lately, they have the right deal!

G2A for the world ! Best place to buy them keys ! Never had issues with them plus they are really fast in replying so should be no problem at all. Their services is fast and cheap too !

InstantGaming is the best web to buy ever! They are 100 % reliable and incredibly fast.