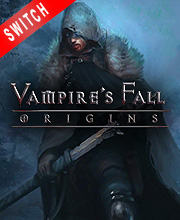 It's a digital key that allows you to download Vampires Fall Origins directly to Nintendo Switch directly from Nintendo eShop.

How can I find the best prices for Vampires Fall Origins on Nintendo Switch ?

Clearly made by gamers with a strong affection for the 2D RPGs of old, Vampire’s Fall: Origins surpasses the standard of typical mobile games and delivers a solid experience that manages to stand on its own two feet. For gamers who want a value-for-money RPG and who can abide the lack of bells and whistles, look no further than this bargain bloodletter.

Zoom 1m 3m 1y All
Track product
NINTENDO CODE : This is a digital code for Vampires Fall Origins. Use the download code on the Nintendo eShop of your Console. Once connected to the Nintendo eShop, you can enter and redeem the Download Code. Read carefully the store description about any language and region restrictions.
Standard Edition
Compare Choose & Buy Download (772)