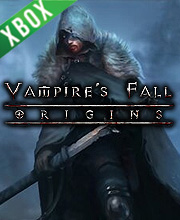 It's a digital key that allows you to download Vampires Fall Origins directly to Xbox One from Xbox Live.

How can I find the best prices for Vampires Fall Origins on Xbox one?

Vampire’s Fall: Origin is a solid little throwback RPG but its mobile roots do show. Those origins are apparent in both the visuals and the repetitive mission design. You do get a lot of content here though especially for a game priced as low as this one is. If you’re looking to spend some as a vampire and explore a vast world then you might want to check this one out.