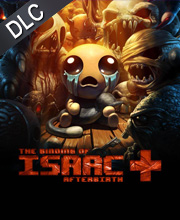 What is The Binding of Isaac Afterbirth+ CD key?

It's a digital key that allows you to download The Binding of Isaac Afterbirth+ directly to PC from the official Platforms.

How can I find the best prices for The Binding of Isaac Afterbirth+ CD keys?

Allkeyshop.com compares the cheapest prices of The Binding of Isaac Afterbirth+ on the digital downloads market to find the best sales and discount codes on trusted stores.

The Binding of Isaac: Afterbirth + is an action, adventure video game developed by Nicalis, Inc and Edmund McMillen and published by Nicalis, Inc. This time you can play the game anywhere with your Nintendo Switch.

When Isaac’s deranged mother attempts to sacrifice her son because of her twisted faith, he escapes to the basement for safety. What he doesn’t know is that the basement is deep with so many rooms, crazy enemies, and long lost brothers and sisters. It also contains his most numbing fears and his terrifying mother as well.

Help Isaac escape and survive the basement and his mother and all the dangers that are after him with The Binding of Isaac: Afterbirth +.

Zoom 1m 3m 1y All
Track product
STEAM CD KEY : Use the Steam Key Code on Steam Platform to download and play The Binding of Isaac Afterbirth+. You must login to your Steam Account or create one for free. Download the (Steam Client HERE). Then once you login, click Add a Game (located in the bottom Left corner) -> Activate a Product on Steam. There type in your CD Key and the game will be activated and added to your Steam account game library.
Bundle
DLC
Compare Choose & Buy Download (743)

Personal GOTY and one of the best bullet hell games created. But, Edmund, what about your childhood? xD