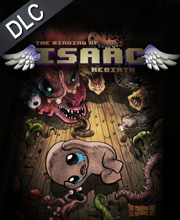 What is The Binding of Isaac Afterbirth CD key?

It's a digital key that allows you to download The Binding of Isaac Afterbirth directly to PC from the official Platforms.

How can I find the best prices for The Binding of Isaac Afterbirth CD keys?

Allkeyshop.com compares the cheapest prices of The Binding of Isaac Afterbirth on the digital downloads market to find the best sales and discount codes on trusted stores.

To avoid this, Isaac escapes into the basement of his house facing the masses enemies which have been disturbed, his brothers and his lost sisters, his fears, and eventually his mother. Following Isaac during his journey players will find bizarre treasures that change the shape of Isaac, giving him superhuman abilities and enabling him to fight mysterious creatures, discover secrets and fight for their own survival.

The basic game brought hundreds of hours of gameplay to the player and the expansions have added a lot of content for this title which has extended the fun.

There are over a hundred new objects that take advantage of a new combination of systems, new boss, a new playable character, new transformations of room types, enemies, challenges, and modes. There is a new area with a new ending to the main game, or an interface review and a elongated soundtrack.

These new additions provide a very extended range of novelties for this gamewhich is already very generous in content, The Binding of Isaac: Rebirth therefore favorably enriches our great pleasure with Afterbirth and give the game something that “looks like a brand new game” if you are to trust the creator willing to believe him.

EUROPEAN STEAM GIFT : It’s a steam gift for Europe which requires an European IP address to activate and to play The Binding of Isaac Afterbirth on Steam. Read carefully the store description about region and language restrictions.
STEAM GIFT : A Steam gift is a one-time transfer you receive. You activate and install The Binding of Isaac Afterbirth to play on Steam, it is a non-refundable game that stays in your Steam games collection. Please read the store description about any language or region restrictions.
STEAM CD KEY : Use the Steam Key Code on Steam Platform to download and play The Binding of Isaac Afterbirth. You must login to your Steam Account or create one for free. Download the (Steam Client HERE). Then once you login, click Add a Game (located in the bottom Left corner) -> Activate a Product on Steam. There type in your CD Key and the game will be activated and added to your Steam account game library.
Bundle
DLC