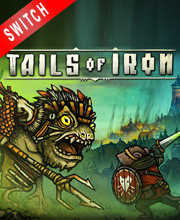 What is Tails of Iron Game Code?

It's a digital key that allows you to download Tails of Iron directly to Nintendo Switch directly from Nintendo eShop.

How can I find the best prices for Tails of Iron on Nintendo Switch ?

I’m impressed by how much thought was put into Tails of Iron and how that shines through while playing the game. Nearly every new screen I entered contained another small inclusion to admire. In my final attack on Frog Village, I found farmer frogs tending to their fields in between fights with enemy frog soldiers.

Tails of Iron is not for the fainthearted. It’s a bloody, brutal, blistering experience from start to finish. Its combat smartly mixes skill and strategy. The game will push you to your limits, but it’s hard not to have fun skewering and slaughtering your way to redemption.

This Edition of Tails of Iron contains the base game plus additional in-game cosmetic items.