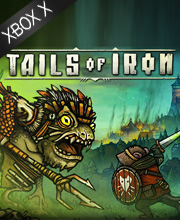 What is Tails of Iron Game Code?

It's a digital key that allows you to download Tails of Iron directly to Xbox Series X from Xbox Live.

How can I find the best prices for Tails of Iron on Xbox Series X ?

It has a fun, a finely-crafted story told through splendid animation and outstanding narration, a gorgeous, adventure-filled world with plenty to explore, and one of the greatest 2D combat systems I’ve ever experienced. Tails of Iron is not only one of the best things I’ve played all year, but it’s a sign of great things to come from an incredibly talented studio.

An exhilarating 2D souls like to set in a remarkably charming world, Tails of Iron is a surprise GOTY candidate. You’ll croak and die often due to the formidable combat but the narrative and systems will keep you coming back for more like a rat do to cheese.

This Edition of Tails of Iron contains the base game plus additional in-game cosmetic items.