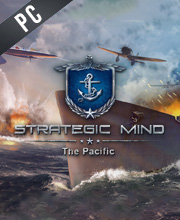 What is Strategic Mind The Pacific CD key?

It's a digital key that allows you to download Strategic Mind The Pacific directly to PC from the official Platforms.

How can I find the best prices for Strategic Mind The Pacific CD keys?

Allkeyshop.com compares the cheapest prices of Strategic Mind The Pacific on the digital downloads market to find the best sales and discount codes on trusted stores.

Strategic Mind the Pacific is a turn-based strategy game developed by Starni Games, a war simulator based on the war in the Pacific between the Japanese Empire and the United States of America during WW II. The main campaign offers a comprehensive experience of the war by giving you the perspective and command for both sides in the conflict. The Majority of the battles in the pacific took place in large-scale naval combat with carriers, destroyers, and aircraft but you will still have to send infantry on landing missions to occupy islands bases. To win you will need solid cooperation and tactical knowledge between all your armies in land, sea, and air.

I cannot really recommend Strategic Mind: The Pacific. Although the strategy mechanics are fine, even if a bit shallow, they are marred by a number of other issues, from wonky controls to subpar graphics. The game could definitely have used a bit more polish while it was still in Early Access.

Zoom 1m 3m 1y All
Track product
GOG.COM CD KEY : You need to register on Gog.com, then use the GOG Key to download and activate your game to play Strategic Mind The Pacific.
STEAM EN KEY : Steam EN Key to download and play Strategic Mind The Pacific in English language only. Read the store description carefully about language and restrictions.
STEAM CD KEY : Use the Steam Key Code on Steam Platform to download and play Strategic Mind The Pacific. You must login to your Steam Account or create one for free. Download the (Steam Client HERE). Then once you login, click Add a Game (located in the bottom Left corner) -> Activate a Product on Steam. There type in your CD Key and the game will be activated and added to your Steam account game library.
Complete Collection
Standard Edition
Compare Choose & Buy Download (772)