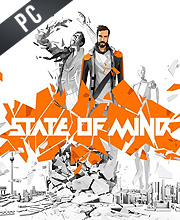 What is State of Mind CD key?

It's a digital key that allows you to download State of Mind directly to PC from the official Platforms.

How can I find the best prices for State of Mind CD keys?

Allkeyshop.com compares the cheapest prices of State of Mind on the digital downloads market to find the best sales and discount codes on trusted stores.

State of Mind is an action, adventure video game that is developed and published by Daedalic Entertainment.

Located in Berlin and the year is 2048 and the world is suffering. Resources are scarce, illness can be seen everywhere and crime and war is a regular scenario. The only thing that the government can come up with as a solution is technological progress. The public sector is being replaced by drones and humanoid robots instead of humans. And because of this, surveillance is everywhere and everything is interconnected.

You can take on the role of 5 characters, one of which is Richard Nolan who is a journalist. His tough as nails attitude let him criticize the government without remorse. One day he wakes up in the hospital and his wife and his son are missing. They are caught right in between the beliefs of the dystopian reality and digital reality.

The game offers a domestic drama with an addition of a thriller regarding a worldwide conspiracy and the core involves the fate of humanity.

Zoom 1m 3m 1y All
Track product
GOG.COM CD KEY : You need to register on Gog.com, then use the GOG Key to download and activate your game to play State of Mind.
EU STEAM CD KEY: Requires an EUROPEAN IP address or you must activate it with a VPN (Virtual Private Network) in order to play State of Mind. Might have languages restrictions or language packs. Read the description on the store game page to know if the EU IP is only needed for activation or for playing also (maybe on EU Servers). Most of the stores offer you their help, or show you how to do this with a tutorial to follow.
EUROPEAN STEAM GIFT : It’s a steam gift for Europe which requires an European IP address to activate and to play State of Mind on Steam. Read carefully the store description about region and language restrictions.
STEAM CD KEY : Use the Steam Key Code on Steam Platform to download and play State of Mind. You must login to your Steam Account or create one for free. Download the (Steam Client HERE). Then once you login, click Add a Game (located in the bottom Left corner) -> Activate a Product on Steam. There type in your CD Key and the game will be activated and added to your Steam account game library.
STEAM KEY ROW : It means for Rest Of the World countries which are not concerned by the region restrictions. This product can't be purchased and activated in Several countries. Please read the store description to know the full list of countries which are concerned. Use the key to Download and play State of Mind on Steam.
Windows 10 Global : This is an Worldwide Microsoft code to play on PC for Worldwide . You need to have installed Windows 10 Anniversary Edition update on your PC. Log into your Microsoft account to download and play. Read closely the description given by the store to activate your game.
Standard Edition
Compare Choose & Buy Download (759)

State of Mind is an intriguing, dense sci-fi adventure with pretty environments.

what a good game with good deal , you can buy it in half 😀

Another awesome game by Daedalic Entertainment. The price is too low, so better buy it now, before it’s too late!

Never heard of it, but looks like a good adventure game, at a great price on allkeyshop