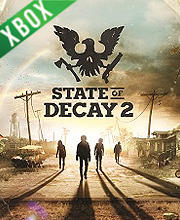 What is State of Decay 2 Game Code?

It's a digital key that allows you to download State of Decay 2 directly to Xbox One from Xbox Live.

How can I find the best prices for State of Decay 2 on Xbox one?

Allkeyshop.com compares the cheapest prices of State of Decay 2 on the digital downloads market to find the best sales and discount codes on trusted stores.

the first one was dope, reminded me of an open world zombie game called ‘fort’ something that I played as a kid

A very new and good game for us all to enjoy. Go and grab it!

The previous State of Decay game is really awesome. Love playing it.
Hope the new one unravels a great story.
Grat deal btw

State of Decay is one of the best, I hope this 2nd installment will rise bar again!

Hello, I bought the State of Decay 2 in MTC Games and it has gone well the only thing that the edition that I was buying was not the Ultimate Edition, it is the Standart Edition and that is a problem. But hey, it’s not bad either for the price the normal edition. Thanks for looking for a good offer.