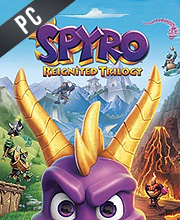 You can participate to these tests by adding comments about your digital download purchase in the store review page. Enjoy the best deals for Spyro Reignited Trilogy CD Key with Allkeyshop.com!

Spyro Reignited Trilogy is an action, adventure video game developed by Toys for Bob and Iron Galaxy and is published by Activision.

Get to enjoy playing as Spyro once again with the Spyro Reignited Trilogy. All three original games are included: Spyro the Dragon, Spyro 2: Ripto’s Rage, and Spyro Year of the Dragon all remade in HD glory.

In Spyro the Dragon, play as the young purple dragon Spyro as he saves the dragons from the half-orc and half gnome Gnasty Gnorc. Spyro must free the crystalized dragons and defeat Gnasty Gnorc.

In Spyro 2: Ripto’s Rage, Spyro ends up in Avalar where the angry warlock Ripto had been accidentally summoned. Along with Ripto are his equally evil minions Crush and Gulp. It is great timing that Spyro is in the area, as it is up to him to set things right.

Spyro Year of the Dragon opens with a celebration in the land of the dragons. It is the Year of the Dragon and this happens only every 12 years. As part of the festivities, new dragon eggs are brought out. Bianca the rabbit has other plans though as she and some Rhino-based creatures steal the eggs and deliver them to the sorceress. Spyro and some friends are then trashed to recover the dragon eggs.

Be the first one to write a review about Spyro Reignited Trilogy !

Missing Price: the game is on HRK GAME https://www.hrkgame.com/en/games/product/spyrotm-reignited-trilogy/

Ok i checked thanks for the report, i have advice the team and it will be added.