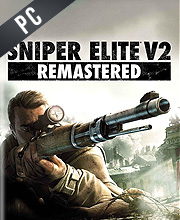 It's a digital key that allows you to download Sniper Elite V2 Remastered directly to PC from the official Platforms.

How can I find the best prices for Sniper Elite V2 Remastered CD keys?

Allkeyshop.com compares the cheapest prices of Sniper Elite V2 Remastered on the digital downloads market to find the best sales and discount codes on trusted stores.

Sniper Elite V2 Remastered is an action video game that is developed and published by Rebellion.

Play as Karl Fairburne an elite sniper who finds himself in Berlin in the middle of the German’s Final Stand. You must help the key scientists who are trying to deflect to the U.S. These scientists have the information for the Nazi V2 rocket technology and under no circumstance should it land on the hands of the Red Army.

This remastered version offers new graphics as well as an updated rendering technology that gives you the most detail. Also, all the previous DLCs are included like the ‘Assassinate The Führer Mission’ and more. The photo mode is also available allowing players to take stunning pictures of the game’s environment and sharing it with the online community. New playable characters are also included, there are 7 new playable characters which came from Rebellion’s Zombie Army series.

Also, get to enjoy the game’s multiplayer and co-op modes. There are 7 unique modes to choose from as well as a multiplayer of up to 16 players online. These include Capture The Flag, Dogtag Harvest, Death Match and more.

Upgrade: Only available for customers who previously purchased the original Sniper Elite V2.

GOG.COM CD KEY : You need to register on Gog.com, then use the GOG Key to download and activate your game to play Sniper Elite V2 Remastered.
PUBLISHER WEBSITE CD KEY: Use the CD Key Code to download directly on the Official Website or from the store to play Sniper Elite V2 Remastered. Follow the instructions given by the store. Verify languages available and possible region restrictions before buying.
EUROPEAN STEAM GIFT : It’s a steam gift for Europe which requires an European IP address to activate and to play Sniper Elite V2 Remastered on Steam. Read carefully the store description about region and language restrictions.
STEAM GIFT : A Steam gift is a one-time transfer you receive. You activate and install Sniper Elite V2 Remastered to play on Steam, it is a non-refundable game that stays in your Steam games collection. Please read the store description about any language or region restrictions.
STEAM CD KEY : Use the Steam Key Code on Steam Platform to download and play Sniper Elite V2 Remastered. You must login to your Steam Account or create one for free. Download the (Steam Client HERE). Then once you login, click Add a Game (located in the bottom Left corner) -> Activate a Product on Steam. There type in your CD Key and the game will be activated and added to your Steam account game library.
PC Win 10 / Xbox Key : This is a Microsoft Xbox Play Anywhere code to play on PC and Xbox One and XBOX X|S. You need to have installed Windows 10 Anniversary Edition update on your PC or the latest update on your Xbox console. Log into your Microsoft account to download and play. Read closely the description given by the store to activate your game.
Standard Edition
Upgrade

Very good shooting game, but i will not buy remaster, its only waste of money for that huge price.

Original Sniper Elite V2 was great on release. Not sure what they’re adding with remaster but the upgrade option is nice.

funny game, good if you always like to make those long shots