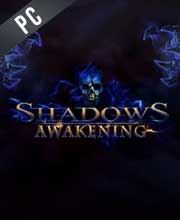 What is Shadows Awakening CD key?

It's a digital key that allows you to download Shadows Awakening directly to PC from the official Platforms.

How can I find the best prices for Shadows Awakening CD keys?

Allkeyshop.com compares the cheapest prices of Shadows Awakening on the digital downloads market to find the best sales and discount codes on trusted stores.

Shadows: Awakening is an action, role-playing video game that is developed by Game’s Farm s.r.o. And published by Kalypso Media Digital.

Once again, step into the Heretic Kingdoms saga with the new adventure that Shadows: Awakening has to offer. The Penta Nera, a secret council has been assassinated and the souls of each member have been consumed by the evil demons called the Devourers they have the ability to absorb memories and personalities from the souls that they are able to get and then animate them once again but now as their puppets. Now the demonic Penta Nera has re-emerged with they quest for power and immortality.

Offering players a unique, isometric, single-player RPG mixed with real-time tactical combat. You will actually play as the Devourer, the demon that has been summoned from the Shadow Realm. You will be consuming the souls of long dead heroes and will go through a challenging gameplay with an epic adventure. The storyline is gripping and graphics very enchanting. However, you have to make sure that you are still in charge instead of the souls that you have devoured. This could go both ways, either you would save the world or give a hand in its destruction.

Zoom 1m 3m 1y All
Track product
GOG.COM CD KEY : You need to register on Gog.com, then use the GOG Key to download and activate your game to play Shadows Awakening.
EU STEAM CD KEY: Requires an EUROPEAN IP address or you must activate it with a VPN (Virtual Private Network) in order to play Shadows Awakening. Might have languages restrictions or language packs. Read the description on the store game page to know if the EU IP is only needed for activation or for playing also (maybe on EU Servers). Most of the stores offer you their help, or show you how to do this with a tutorial to follow.
STEAM CD KEY : Use the Steam Key Code on Steam Platform to download and play Shadows Awakening. You must login to your Steam Account or create one for free. Download the (Steam Client HERE). Then once you login, click Add a Game (located in the bottom Left corner) -> Activate a Product on Steam. There type in your CD Key and the game will be activated and added to your Steam account game library.
STEAM KEY ROW : It means for Rest Of the World countries which are not concerned by the region restrictions. This product can't be purchased and activated in Several countries. Please read the store description to know the full list of countries which are concerned. Use the key to Download and play Shadows Awakening on Steam.
Complete Pack
Standard Edition
Compare Choose & Buy Download (743)

Hello there,
I love Shadows Awakening so much my best game ever

The game looks really fun and interesting. Definitely worth the price for it

Shadows Awakening looks to be a interesting action-rpg game. HRK it’s a good store to buy it.