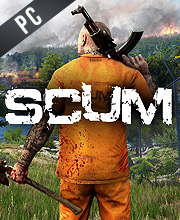 What is SCUM CD key?

It's a digital key that allows you to download SCUM directly to PC from the official Platforms.

How can I find the best prices for SCUM CD keys?

Allkeyshop.com compares the cheapest prices of SCUM on the digital downloads market to find the best sales and discount codes on trusted stores.

SCUM is a videogame developped by Gamepires. The game is described as a “prison survival game” and features an open world. Much like the famous DayZ, this game can also be considered an MMO, an Action game, but it also has a lot of RPG elements.

You are a prisoner and have been sent to an island with 63 other players (64 total), each of you with a tracking device implanted on the back of your head so you can’t escape the island. So of course, your first mission will be to find a way to remove this implant while surviving your environment, other players and of course zombies. That is why you will need to scavenge the island for weapons and resources.

The character you play can be developed as much as in RPGs. During the creation you will need to decide what gender, age, shape and weight he will be. But that is just the start. You will also have to choose between four main attributes: strength, dexterity, constitution and intelligence. Each will have different influence on your character, like running longer, surviving longer without food or being able to receive more damage.

The game propose both first and third person perspective, but in an effort to balance them, the third person longer viewing distance is blurred.

SCUM definitely sounds like a lot of fun and you have to admit the graphics are quite good!

STEAM CD KEY : Use the Steam Key Code on Steam Platform to download and play SCUM. You must login to your Steam Account or create one for free. Download the (Steam Client HERE). Then once you login, click Add a Game (located in the bottom Left corner) -> Activate a Product on Steam. There type in your CD Key and the game will be activated and added to your Steam account game library.
EU STEAM CD KEY: Requires an EUROPEAN IP address or you must activate it with a VPN (Virtual Private Network) in order to play SCUM. Might have languages restrictions or language packs. Read the description on the store game page to know if the EU IP is only needed for activation or for playing also (maybe on EU Servers). Most of the stores offer you their help, or show you how to do this with a tutorial to follow.
EUROPEAN STEAM GIFT : It’s a steam gift for Europe which requires an European IP address to activate and to play SCUM on Steam. Read carefully the store description about region and language restrictions.
STEAM GIFT : A Steam gift is a one-time transfer you receive. You activate and install SCUM to play on Steam, it is a non-refundable game that stays in your Steam games collection. Please read the store description about any language or region restrictions.
Standard Edition. Read the store description to know the content.
Early Access CD Key. Play before the release date.
Bonus Edition. Read the store description to know the content.

Be the first one to write a review about SCUM !

Good game. One of the best in this kind. Lot of news, and still in early. Try it!

One of the best Images I have seen, laags a bit still

I am still waiting for my luck to win this game…looks promising,made in Croatia by our neighbours 🙂

noprice, so i cant buy. oh wait, i dont want this game :p
have fun