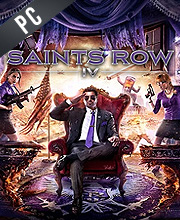 What is Saints Row 4 CD key?

It's a digital key that allows you to download Saints Row 4 directly to PC from the official Platforms.

How can I find the best prices for Saints Row 4 CD keys?

Allkeyshop.com compares the cheapest prices of Saints Row 4 on the digital downloads market to find the best sales and discount codes on trusted stores.

It is the fourth installment in the Saints Row series. You will take on the role of the leader of the world’s most popular and powerful street-gang-turned-organization, the Saints. You have been elected as the President of the United States, and you receive super powers to fend off an alien invasion.

Whether it be leaping over buildings, killing people using your mind, or running through tanks, your superpower is your greatest weapon, along with a wide array of custom weapons and vehicles available for you.

With its open-world environment, you are free to roam around and explore the fictional city of Steelport while completing side missions. There may be quite a number of shoot-outs and racing activities to engage on, so better keep your guard up all the time. As you progress through the game, you get to upgrade abilities as well as your weapons skill tree.

And the best thing about this game? You can customize your character however you want it with the game’s Character Editor feature. Of course, the signature parodies the series is known for is still present in Saints Row 4, the most noted ones are those of Mass Effect 2 and of films like The Matrix.

Uncut: This is the full uncut edition! It is uncensored.

This game is very fun, it’s like gta, but better, with more fun and wtf, and less loading screens, price is cheap too !

price is incorrect for instant Gaming, the price listed here is only for commander in chief DLC

instant gaming sells s a DLC for 1,70 and not a full game.

Hi, we will fix this error. Thank you.

great game. Had lots of fun while playing it. Great action, loved the humor. Would totally buy again 😛

this is really good game, i have enjoyed playing it!!