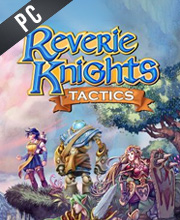 It's a digital key that allows you to download Reverie Knights Tactics directly to PC from the official Platforms.

How can I find the best prices for Reverie Knights Tactics CD keys?

Allkeyshop.com compares the cheapest prices of Reverie Knights Tactics on the digital downloads market to find the best sales and discount codes on trusted stores.

Reverie Knights Tactics is a turn-based tactical role-playing game that features strategic battles on isometric grids. You are on a mission to find long lost elvian city of Lennorien to save the ones you love. Across the continent, a goblin menace has been spreading terror, and you must stop it!

Between its fun dialogue, great gameplay, and stunning visuals, this is a game that’s not to be missed.

As a long-time fan of SRPGs, I’ve never played anything quite like Reverie Knights Tactics before and I’m glad that I did.

Undeniably a love letter to old-school tactical RPGs, Reverie Knights Tactics packs in enough charm and replayability to please fans of the genre, but won’t be knocking the likes of Fire Emblem or Disgaea off their respective perches any time soon. Its comic book aesthetic also takes a while to get used to, but like the nuances of its story or its branching character development, its charm grows as you play. However, it doesn’t really offer anything that fans of TRPGs won’t have experienced elsewhere, and the lack of final polish undermines its aspirations.

Zoom 1m 3m 1y All
Track product
NINTENDO GAME CODE EUROPE : This is Reverie Knights Tactics Download Code for Nintendo Europe Console. Use the Digital Game Code on the Nintendo eShop of your Console. Once connected to the Nintendo eShop, you can enter and redeem the Download Code. Read carefully the store description about any language and region restrictions.
GOG.COM CD KEY : You need to register on Gog.com, then use the GOG Key to download and activate your game to play Reverie Knights Tactics.
EU STEAM CD KEY: Requires an EUROPEAN IP address or you must activate it with a VPN (Virtual Private Network) in order to play Reverie Knights Tactics. Might have languages restrictions or language packs. Read the description on the store game page to know if the EU IP is only needed for activation or for playing also (maybe on EU Servers). Most of the stores offer you their help, or show you how to do this with a tutorial to follow.
STEAM CD KEY : Use the Steam Key Code on Steam Platform to download and play Reverie Knights Tactics. You must login to your Steam Account or create one for free. Download the (Steam Client HERE). Then once you login, click Add a Game (located in the bottom Left corner) -> Activate a Product on Steam. There type in your CD Key and the game will be activated and added to your Steam account game library.
STEAM KEY ROW : It means for Rest Of the World countries which are not concerned by the region restrictions. This product can't be purchased and activated in Several countries. Please read the store description to know the full list of countries which are concerned. Use the key to Download and play Reverie Knights Tactics on Steam.
Standard Edition
Compare Choose & Buy Download (743)