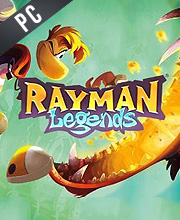 What is Rayman Legends CD key?

It's a digital key that allows you to download Rayman Legends directly to PC from the official Platforms.

How can I find the best prices for Rayman Legends CD keys?

Allkeyshop.com compares the cheapest prices of Rayman Legends on the digital downloads market to find the best sales and discount codes on trusted stores.

Rayman Legends is an action adventure platform video game developed by Ubisoft Montpellier and published by Ubisoft. It is the fifth game in the Rayman series and the direct sequel to the game Rayman Origins.

Rayman Legends received critical acclaim upon release. It offers the best qualities of what a platformer should be: great level design, controls, soundtrack, overall gameplay, and the large amount of content – definitely one of the best platforming video games ever made.

It’s bright, colourful, clever, well-designed, and the vast majority of it is a sheer joy to experience. Ubisoft has done a fine job on this one. Stunning visuals, awesome levels (you’ll never get bored as you will witness something new and creative in every level), plenty of levels, and a special mention to the background score.

The game has a nice mixture of easy and tough levels. For gamers who want challenging levels, it is going to be extremely fun! Four player co-op is an absolute treat, and will be a lot more easier to play than single-player. It didn’t get the title best platformer ever for nothing. Go for it!

Be the first one to write a review about Rayman Legends !

Nice and funny gameplay, relaxing for kids and not only…

Just finished it and it’s amazing. I wasn’t sure about it at first, but it gets a lot better as goes and the music levels are probably the best levels in platformers. Still on the fence as to whether or not it’s better than 3D World, but I’d say it’s up there; certainly the most original platformer I’ve seen in a very long time.

This game is good to play with all the family in coop since it’s pegi for all-ages, not obliged to be a fan of platformers just having fun playing this game with family is good enough and also the game has outstading art and effects so it’s a win-win on the whole 🙂