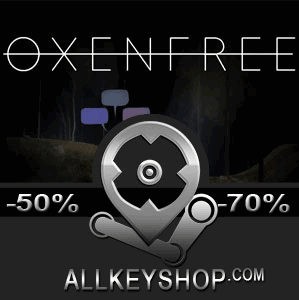 What is Oxenfree CD key?

It's a digital key that allows you to download Oxenfree directly to PC from the official Platforms.

How can I find the best prices for Oxenfree CD keys?

Allkeyshop.com compares the cheapest prices of Oxenfree on the digital downloads market to find the best sales and discount codes on trusted stores.

Oxenfree is an adventure, indie video game presented to you in a 2.5D perspective. The game is developed and published by Night School Studio.

This is the first ever game from Night School Studio. The game’s original artwork came from Heather Gross and the amazing script from Adam Hines, who was also the lead writer for Tales from the Borderlands.

Oxenfree offers you a thrilling graphic adventure set in an isolated island. You will get to play as a smart rebellious teenager named Alex. She, with a group of friends along with her new step brother Jonas go to an overnight party in the ex-military island named Edwards Island. The mood becomes tense as Alex and the gang unknowingly open a portal to an alternate world of ghostly creatures connected to the island’s dark past.

The game’s dialogue is very unique as it will appear as speech bubbles above Alex’s head, this way it will be easier for you to choose what Alex will say next and decide which direction the conversation will go. Alex will also have a very useful handheld radio with her, you can use this radio to solve puzzles by finding the correct frequency for it. The radio has a lot of uses, unlocking doors and communicating with ghosts are to name a few.

You must overcome what the island throws at you and at the same time think of your peer’s welfare. Are you up for the challenge?

Zoom 1m 3m 1y All
Track product
EPIC GAMES KEY : Region Free / Worldwide. Requires Epic Games Launcher App in order to play the game. You need to create a free account here in order to download Oxenfree from Epic Plateform . Read the description on the store page about any language or country restrictions.
GOG.COM CD KEY : You need to register on Gog.com, then use the GOG Key to download and activate your game to play Oxenfree.
EU STEAM CD KEY: Requires an EUROPEAN IP address or you must activate it with a VPN (Virtual Private Network) in order to play Oxenfree. Might have languages restrictions or language packs. Read the description on the store game page to know if the EU IP is only needed for activation or for playing also (maybe on EU Servers). Most of the stores offer you their help, or show you how to do this with a tutorial to follow.
EUROPEAN STEAM GIFT : It’s a steam gift for Europe which requires an European IP address to activate and to play Oxenfree on Steam. Read carefully the store description about region and language restrictions.
STEAM GIFT : A Steam gift is a one-time transfer you receive. You activate and install Oxenfree to play on Steam, it is a non-refundable game that stays in your Steam games collection. Please read the store description about any language or region restrictions.
STEAM CD KEY : Use the Steam Key Code on Steam Platform to download and play Oxenfree. You must login to your Steam Account or create one for free. Download the (Steam Client HERE). Then once you login, click Add a Game (located in the bottom Left corner) -> Activate a Product on Steam. There type in your CD Key and the game will be activated and added to your Steam account game library.
Windows 10 Global : This is an Worldwide Microsoft code to play on PC for Worldwide . You need to have installed Windows 10 Anniversary Edition update on your PC. Log into your Microsoft account to download and play. Read closely the description given by the store to activate your game.
Bundle
Standard Edition
Compare Choose & Buy Download (743)

I can’t stress enough how great Oxenfree is, especially for its current price tag. A must play!

Awesome game that I would recommend to point&click lovers. The soundtrack, visuals and the story are really good.