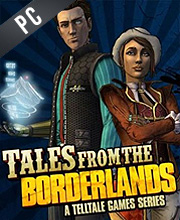 You can participate to these tests by adding comments about your digital download purchase in the store review page. Enjoy the best deals for Tales from the Borderlands CD Key with Allkeyshop.com!

It pretty much follows the same patterns from similar games in the genre, where player actions and choices always have an effect on the game later on.

It still has the same mechanics where actions made by the player have an impact on story elements in future episodes.  The game also includes some degree of the shooter elements featured in the Borderlands series, particularly the procedurally-generated guns and loot generation.

The game takes place in the same setting as Borderlands 2, Tales from the Borderlands is about Rhys, a Hyperion company man looking to become the next Handsome Jack; it’s also about Fiona, a Pandoran con artist out to score the biggest of all swindles. You can take control of both sides of the coin. You are the final author in a brand new Borderlands story set on the unforgiving world of Pandora.

Great storytelling, amazing voice acting, awesome overall borderlands feeling, they pretty much nailed everything you could have hoped for.

PUBLISHER WEBSITE CD KEY: Use the CD Key Code to download directly on the Official Website or from the store to play Tales from the Borderlands. Follow the instructions given by the store. Verify languages available and possible region restrictions before buying.
STEAM CD KEY : Use the Steam Key Code on Steam Platform to download and play Tales from the Borderlands. You must login to your Steam Account or create one for free. Download the (Steam Client HERE). Then once you login, click Add a Game (located in the bottom Left corner) -> Activate a Product on Steam. There type in your CD Key and the game will be activated and added to your Steam account game library.
STEAM GIFT : A Steam gift is a one-time transfer you receive. You activate and install Tales from the Borderlands to play on Steam, it is a non-refundable game that stays in your Steam games collection. Please read the store description about any language or region restrictions.
Standard Edition. Read the store description to know the content.

Be the first one to write a review about Tales from the Borderlands !

TFTB isn’t perfect but might be the best Telltale game overall.

Good adventure series, excellent price for this one!

Borderlands is great game that you can try it worth time spending . xD

yes this game is….. very goooooood