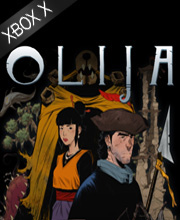 It's a digital key that allows you to download Olija directly to Xbox One from Xbox Live.

How can I find the best prices for Olija on Xbox one?

Olija feels unique, original and has a lot of charm to it. It’s abundantly clear it was created with a lot of love and care, and while the journey didn’t last as long as I’d hoped, I enjoyed every minute in the lands of Terraphage with Faraday.

Olija’s best asset, truly, is its brevity. Its story is impeccably paced. Its mechanics never wear out from overuse. From start to finish, it finds new ways to gently goad you into using the harpoon in different ways, until it says its piece. I was taken with how emotionally resonant and mechanically pleasing it could be in such a short time. Succinct and satisfying is a rare combination, and it makes Olija a rare treat.

Zoom 1m 3m 1y All
Track product
XBOX ONE GAME CODE : Use the Digital Code received by mail in your Xbox One account to download Olija from the Xbox Live. Internet connection is required. Please read the store description about any language or region restrictions.
Standard Edition
Compare Choose & Buy Download (791)