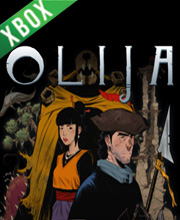 It's a digital key that allows you to download Olija directly to Xbox One from Xbox Live.

How can I find the best prices for Olija on Xbox one?

Olija oozes originality, from its cinematic storytelling to its uniquely retro graphics and the genre-bending award-worthy soundtrack that ties it all together. And don’t forget about its fluid combat and exploration-focused gameplay that slowly introduces new mechanics that keep the game engaging and fun but at the same never letting it get too complex. For a while I put off engaging in what I believed to be the final encounter because I truly enjoyed my time in the game world and wanted it to continue. While watching the final cut scene I was not so secretly hoping my character would get dragged back into the land of Terraphage. I felt like there were still mysteries to discover; maybe there was another island hidden somewhere. I’ll definitely be playing through the game again at some point. The bottom line is Devolver Digital has another winner on its hands in Olija.

Olija on Xbox is a game to be savoured. Everything about it is rich and expertly crafted, from the slick combat to the world of Terraphage, scattered with secrets. It’s over far too soon, so relish the experience while it’s there, as Olija is an astonishing adventure game that you can lose yourself in utterly.

Zoom 1m 3m 1y All
Track product
XBOX ONE GAME CODE : Use the Digital Code received by mail in your Xbox One account to download Olija from the Xbox Live. Internet connection is required. Please read the store description about any language or region restrictions.
Standard Edition
Compare Choose & Buy Download (791)