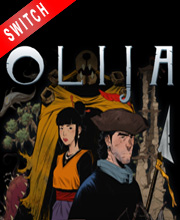 It's a digital key that allows you to download Olija directly to Nintendo Switch directly from Nintendo eShop.

How can I find the best prices for Olija on Nintendo Switch ?

But for myself, who liked every aspect of Olija, the whole package is a flawed but thoroughly impressive ride. There is a lot to enjoy here, in a game which lets the player feel alienated and disempowered one moment, and then agile and dangerous the next. It wins even more points for the way that it perfects the cinematic platformer formula which has a lot of nostalgia value, but not a lot of modern interpretations. I love that Olija arrives as a palette cleanser to the Metroidvanias and the rogue-lites of the side-scroller scene, and I wish all the success for it.

Olija is an exceptional game with style and substance in heaps. While certain aspects of the combat aren’t necessary, they can make everything you do feel a lot cooler. The story itself is a quiet romance and a dramatic supernatural tale at the same time, even if the ending is a bit flat. The soundtrack is brilliantly weird, nimbly flicking between disparate genres while consistently enhancing every interaction. All these things come together to make a game that is playful, heartfelt, and satisfying. It is a generous game in more ways than one, and I can’t wait to play it again.

Zoom 1m 3m 1y All
Track product
NINTENDO CODE : This is a digital code for Olija. Use the download code on the Nintendo eShop of your Console. Once connected to the Nintendo eShop, you can enter and redeem the Download Code. Read carefully the store description about any language and region restrictions.
Standard Edition
Compare Choose & Buy Download (791)