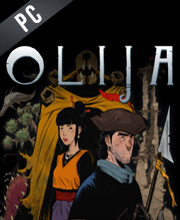 What is Olija CD key?

It's a digital key that allows you to download Olija directly to PC from the official Platforms.

How can I find the best prices for Olija CD keys?

Olija is incredibly cinematic, despite its minimalist approach to art style. The game still feels fantastical thanks to an incredible attention to detail with both the visual and sound design. In addition, Olija tells a heartfelt story with important themes, while keeping satisfying gameplay at the center of it all. It becomes even more impressive when you realize the game was practically developed by one person, Thomas Olsson of Skeleton Crew Studios. Olija is a pleasant treat and likely an early frontrunner for one of the best indie titles of 2021.

Overall Olija is a good game. I just wish it was longer. I finished a fair portion of the game in around 5 hours and I can’t imagine I would have spent much longer had I decided to get all the collectibles. However, I think $15 is the perfect price for Olija; I much rather have a short good game than a long mediocre one and being left wanting more is a much better problem to have than never wanting to touch a game again. Just know that Olija is a concise but strong experience and a great way to start off 2021.

Zoom 1m 3m 1y All
Track product
EPIC GAMES KEY : Region Free / Worldwide. Requires Epic Games Launcher App in order to play the game. You need to create a free account here in order to download Olija from Epic Plateform . Read the description on the store page about any language or country restrictions.
GOG.COM CD KEY : You need to register on Gog.com, then use the GOG Key to download and activate your game to play Olija.
STEAM CD KEY : Use the Steam Key Code on Steam Platform to download and play Olija. You must login to your Steam Account or create one for free. Download the (Steam Client HERE). Then once you login, click Add a Game (located in the bottom Left corner) -> Activate a Product on Steam. There type in your CD Key and the game will be activated and added to your Steam account game library.
Windows 10 Global : This is an Worldwide Microsoft code to play on PC for Worldwide . You need to have installed Windows 10 Anniversary Edition update on your PC. Log into your Microsoft account to download and play. Read closely the description given by the store to activate your game.
Bundle
Bundle 1
Standard Edition
Compare Choose & Buy Download (743)