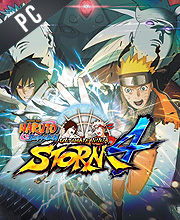 It's a digital key that allows you to download Naruto Shippuden Ultimate Ninja Storm 4 directly to PC from the official Platforms.

How can I find the best prices for Naruto Shippuden Ultimate Ninja Storm 4 CD keys?

The story takes place during the fourth great ninja war. Naruto Ultimate Ninja Storm 4 has the same combat system from the previous games, either in one against one or with two supporting characters in 3D arenas.

The game consists of different modes: story mode with boss fights Kabuto as a hermit against Sasuke Uchiwa assisted by his brother Itachi Uchiha, Naruto Uzumaki Tobi assisted by Kakashi Hatake as well as Maito Gai and many more yet.

Another mode is introduced: you can change the main character in combat.

There are also modes to play against opponents via internet.

New playable characters are introduced which Otsutsuki Kaguya, Rin Nohara, Hanabi Hyuga and the adult characters from the movie The Last: Naruto The Movie. The game features more than 75 characters (including supporting characters).

Naruto Shippuden : Ultimate Ninja Storm 4 is armed with good content, many new characters, graphics improvements, a game that should not be missed!

A great game for Naruto fans, fun and easy gameplay, also lots of fun with friends and the best part is that your friend dosent need to own the game, use steam remote play or a program thats like it like parsec, 10/10 highly recommend

One of the best Naruto games out there! All modes are really good

Best choice at the moment! But that can chance in an instant 😉

i love this game and good discount thanks allkeyshop for discount.

You can always find the best prices for any game in AllKeyShop!